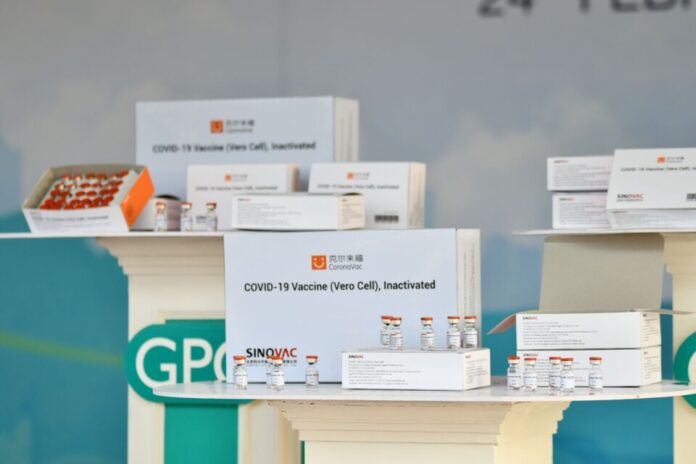 Pattaya Public Health Officials have repeatedly stated that foreign residents will be allowed to take part in the free vaccination process in the province, although details have still not been crystal clarified, but that could change this week.

Chonburi is set to start mass vaccination likely this week upon arrival of 20,000 doses for Banglamung from Sinovac. In the next few weeks, the majority of Thailand’s vaccines produced locally and under the AstraZeneca brand, should start to become available. Pattaya, due to the economic importance of the city to tourism, is one of five major initial priority zones for vaccines in the country. The province has previously been vaccinating first responders, law enforcement, government officials, and health care workers. One will not be able to choose the brand they wish to have if they attend a public mass vaccination center.

The focus with the arrival of larger batches of vaccines will be on the elderly and vulnerable and on those who work in the tourism industry, according to the Pattaya Mayor who completed his own vaccination process last week and is encouraging others to get vaccinated as soon as they can. Vaccinating hospitality workers from restaurants, hotels, and entertainment venues along with tourist attractions will be a major focus for Pattaya over the next several weeks as the city aims towards an ambitious goal of being able to fully re-open to vaccinated foreign tourists by October and have at least 70% of the local population vaccinated.

Thai residents are able to apply currently through a LINE application, phone application, over the phone to 1337 at City Hall and potentially as soon as this week, supply allowing, walk-ins at one of the cities vaccination locations, which are Bangkok Pattaya Hospital, Mueang Pattaya School, Pong Municipality, and the Eastern Indoor Athletics Stadium.

As for foreign residents of Chonburi and Pattaya, they will be welcome as well when the supply is available, and an English mobile application is under development by the Thai Government for registration, or they can also call 1337 or walk-in when that process is available according to Pattaya City officials. This should be in the near future. What a foreign resident will need in terms of identification or proving they are a local resident has still not been formally released, although some foreigners with work permits have reported being registered through their social security number and company.

The Pattaya News notes that a specific date has not been given, however, meetings are scheduled early this week and more information will be provided to interested foreign ex-pats when we get it.

For those interested in private registration, several hospitals are now accepting private registration, primarily for the Moderna vaccine. However, there is not a set or specific date on when these will arrive for usage by private hospitals and these will have a cost factor to them that has not been finalized but has been estimated by some hospitals to be less than 3,000 baht. (Not, however, a guarantee) By registering at one’s private hospital of choice they will be contacted when the vaccine supply is available, although this may be significantly longer than getting a vaccine through the mass vaccination local program.

We will keep you updated on all news around Covid-19 vaccines in Pattaya and Banglamung as they are provided to us.