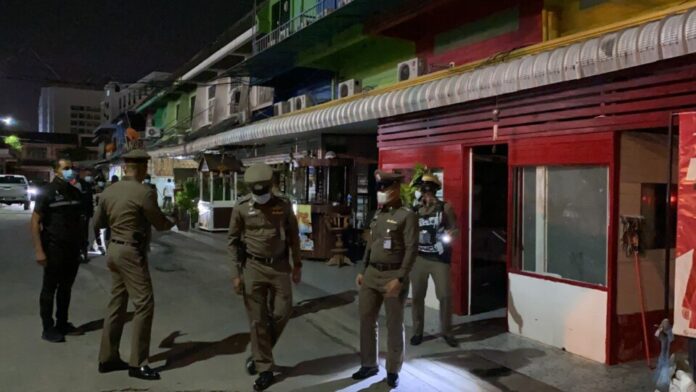 The province of Chonburi has stated they will be accepting the easing of Covid-19 regulations and measures as stated by the Center for Covid-19 Situation Administration (CCSA) in Bangkok yesterday but will be keeping strong provincial measures intact until further notice.

The CCSA announced the easing of measures in provinces yesterday, which you can read more about here. This includes Chonburi being downgraded from the strictest, maximum control zone to a control zone, or dark red to red.

The CCSA national measures, which governors can strengthen if they wish, included dine-in open until 11:00 P.M., later take-away, and allowing limited re-opening of educational facilities with strict measures and local government approval, primarily for limited in-person testing without large numbers of people. Food courts, cafeterias, banquet halls, similar places, can also be opened under these measures for dine-in. Alcohol sales are strictly prohibited. These measures take effect tomorrow, May 17th, 2021.

Bars, nightclubs, and similar entertainment venues remain closed at a national order in every province in the country.  A mask mandate remains in effect as well in public places across the country with strict fines of up to 20,000 baht for violators. This includes driving in a car with more than one person.

The national measures allow other “high-risk” places to open in “red” zones if the Governor chooses to do so, but at this time he has decided to “strengthen” the measures and they will remain the same as the past two weeks.

Koh Larn remains closed to the public as well, the island council is expected to discuss the decision near the end of this week.

Supermarkets, Convenience stores, night markets, restaurants for take-away, etc closed from 11:00 P.M. to 4:00 A.M. Some may close earlier if they are members of retail associations, with most supermarkets closing at 9:00 P.M. and many local 7-11’s, Family Marts, etc. closing at 10:00 P.M. Check with your local store for guidance. All must be closed by 11:00 P.M.

Beaches are open for “exercise-only” in Chonburi, although that can mean different things in different areas based on local law enforcement and leadership. In Pattaya and Jomtien, this means the actual beach area, including the water, is off-limits. Gathering on the beach to eat, drink, socialize, mingle, etc. is strictly forbidden.  Umbrella and beach chair vendors remain closed as officials do not want people to gather and socialize.

Shopping Malls remain open, with closing times between 8:00 P.M. to 9:00 P.M. depending on the mall and their retail association membership. All malls must be closed by 9:00 P.M., although some restaurants may provide take-away later if they are able to.

Gathering limits for official reasons, like work, government meetings, etc. is set at 50 people with approval.  Gathering for social reasons, like throwing a party, is forbidden and even two people could be considered an illegal gathering under the emergency decree. Chonburi has previously asked for cooperation from condos and apartment building owners to help stop and prohibit private home gatherings or “parties.”

TPN media will keep you updated on any changes or further developments as the situation is fluid and can sometimes change on a daily basis. Questions about if your venue can open can be directed to 1337 at City Hall 24 hours a day.