The Chonburi Department of Public Health announced 110 new and confirmed cases of Covid-19 this morning (May 4th), an increase from yesterday that saw 91 cases.

Additionally, 1,338 people in total have now been released from medical care and fully recovered since this current wave began. 101 people were released and recovered from the virus in the past 24 hours in Chonburi. 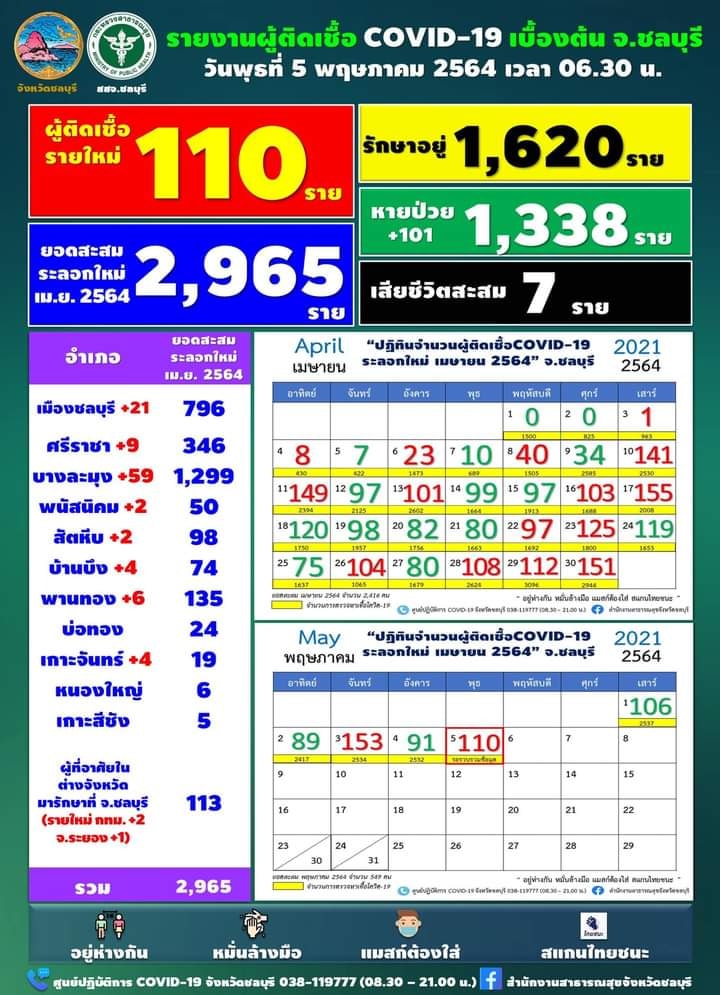 1. Recently went to Rayong province and saw a confirmed patient 1 case
2. A house party in the province, 2 cases
3. A risky occupation (customer-facing, like supermarkets or taxis), 3 people
4.1 1 person from a funeral gathering who saw a confirmed close contact
4.2 5 people from Chonburi workplaces like factories, etc.
4.3 A whole family of 10 people
5. Rural entertainment areas in Chonburi 7 cases
6. Close contacts with timelines under investigation 30 cases
7. In the process of investigation in general 51 cases

Chonburi officials are asking people to continue to stay home, socially distance, and follow other Covid-19 related measures to control the situation. Chonburi officially became deep red according to a government zoning program based on Covid19 cases, which brings additional restrictions for at least two weeks such as the closure of dine-in at restaurants.

Chonburi Public Health officials stated that a sharp increase of cases being traced from family members and home gatherings were being found, warning residents that the majority of cases were now at home and not businesses.  The vast majority of cases are asymptomatic and many people did not know they were infected, officials added.

Finally, checkpoints with document requirements have been canceled as of today in Chonburi BUT people are still being “requested” not to travel or leave the province but no longer need to go through a manual documentation process to get permission to leave which could put them and officials at risk of getting Covid-19.