Bangkok governor Asawin Kwanmuang stated on his Facebook account that Prime Minister Prayut had paid a fine of 6,000 baht for not wearing his mask after leading a government meeting on the Covid-19 situation this morning, April 26th.

The Prime Minister also officially became the first person who has violated the recent regulations of the Communicable Disease Act B.E. 2558 issued yesterday, April 25th, stating that citizens in Bangkok shall always wear sanitary or fabric masks in public places.

Anyone who violates or fails to comply with the statement shall be fined not exceeding 20,000 baht, according to the announcement of the Bangkok Metropolitan Administration (BMA). 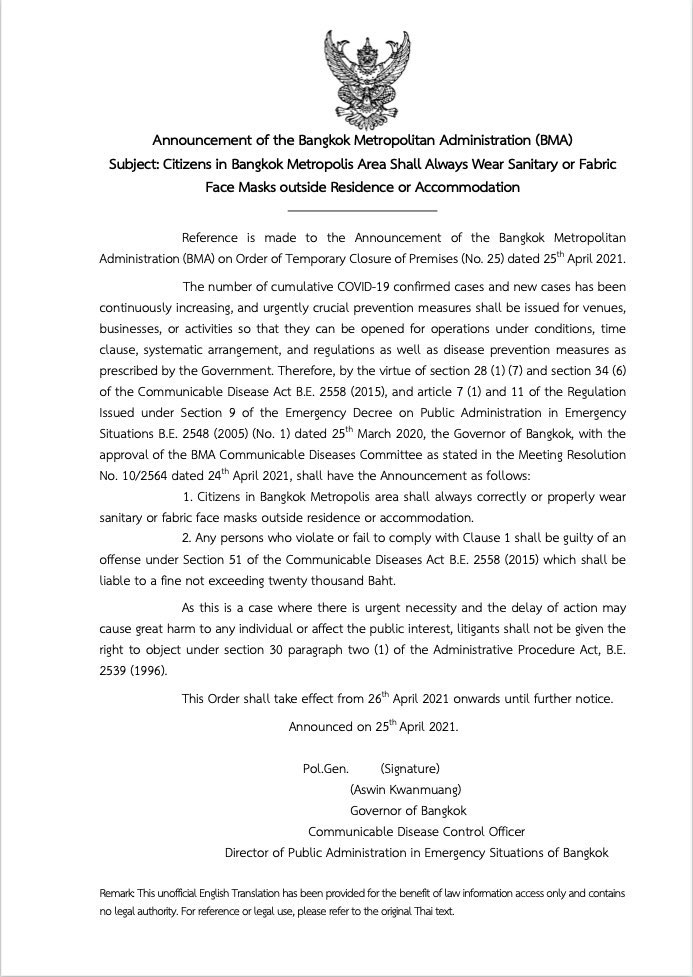 The charge was made after the Prime Minister’s official Facebook account had released a photo of the Prime Minister with a group of vaccination allocation consultants in a meeting at the government house today.

Prayut was spotted in the picture, not wearing a facial mask or any protection to prevent the spread of Covid-19 disease. The picture, however, had been removed shortly following criticisms on Thai social media.

The governor said on his social media account: “I, therefore, declared that such action of the Prime Minister has violated under Section 51 of the Communicable Diseases Act, B.E. 2558. According to the consideration of the National Committee on Communicable Diseases, the Prime Minister was guilty of such an offense and was liable to a fine 6,000 baht.”

The Prime Minister has acknowledged the charge and agreed to pay the fine at the Dusit Police station and has apologized for the incident.