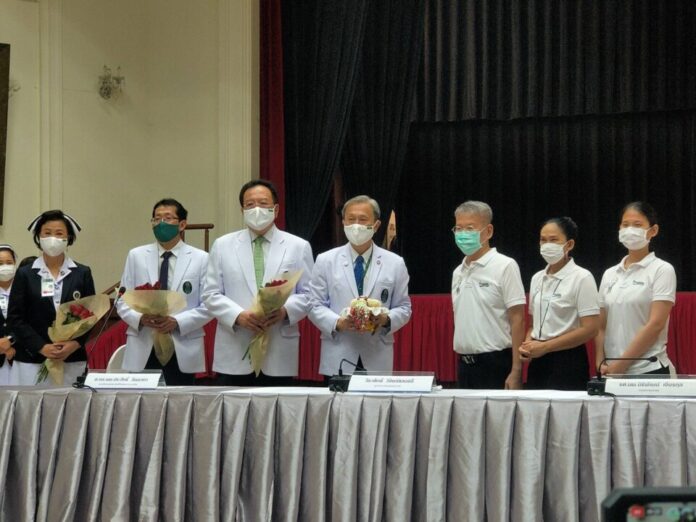 The Samut Sakhon governor Weerasak Vichitsangsri was discharged from Siriraj Hospital in Bangkok today, March 19th, after spending 82 days in the hospital being treated for severe Covid-19 conditions.

The 59-year-old governor was presented at a press conference for the first time this morning in three months after being admitted to the hospital for a Covid-19 infection while he was working during a major cluster at Samut Sakhon’s shrimp market in December.

According to Siriraj officials, he was one of the 20 percent of critical Covid-19 patients in Thailand and was equipped with a ventilator for the longest period in the hospital’s history after doctors found a severe lung inflammation.

Governor Weerasak then thanked all the medical staff involved in his treatment and everyone for their moral support, saying that it was unbelievable for him to recover after being unconscious for 42 days.

“I’d like to thank the doctors, nurses from Samut Sakhon, and Siriraj Hospital, and everyone for showing their support during my treatment, especially the people of Samut Sakhon, Phichit, and Ang Thong provinces,” he said. “I could not believe that I was able to make it after being unconscious for more than 40 days.” Dr. Prasit Watanapa, Dean of Faculty of Medicine Siriraj Hospital, said that the governor planned to return to his hometown in Ang Thong for a full recovery for one month as his health was still weak. Those who were scheduled to meet him during his recovery are highly advised to wear face masks and remain socially distancing. The Deputy Governor will continue to run the province until the Governor can resume his duties likely next month.