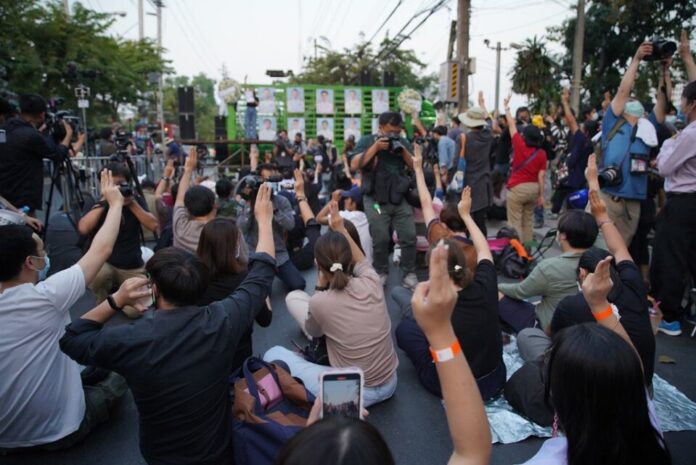 Two pro-democracy demonstrations were staged peacefully in front of the parliament on Friday, February 19th, evening and Saturday, the 20th, for public censure debate and monitoring the no-confidence motion against 10 cabinet ministers, including Prime Minister Prayut Chan O’Cha.

About 10,000 crowd control officers, according to the Royal Thai Police, and several water-cannon trucks were deployed in front of the parliament in the Kiakkai area of the capital after the pro-democracy creative group ‘Mob Fest’ announced a gathering on Friday at 5:00 PM. to stage an “Outside-Parliament Censure Debate”, in which pro-democracy activists would criticize and question the works of the full cabinet to the public. The protest was organized despite the implementation of an Emergency Decree to prevent the spread of Covid-19 Coronavirus which had been in effect since April last year All protests and large gatherings in Bangkok are, therefore, considered illegal, according to the Bangkok police. Penalties included the potential of high fines and jail time.

The “Outside-Parliament Censure Debate” ran for about four hours, featuring prominent speakers such as “Bad Student”‘s Min Lopnaphat, “We Vo”‘s Toto Piyarat, and “United Front of Thammasat and Demonstration”‘s Rung Panusaya. The demonstration was peacefully called off at around 10:00 PM. and protesters were encouraged to join another rally on the following day. 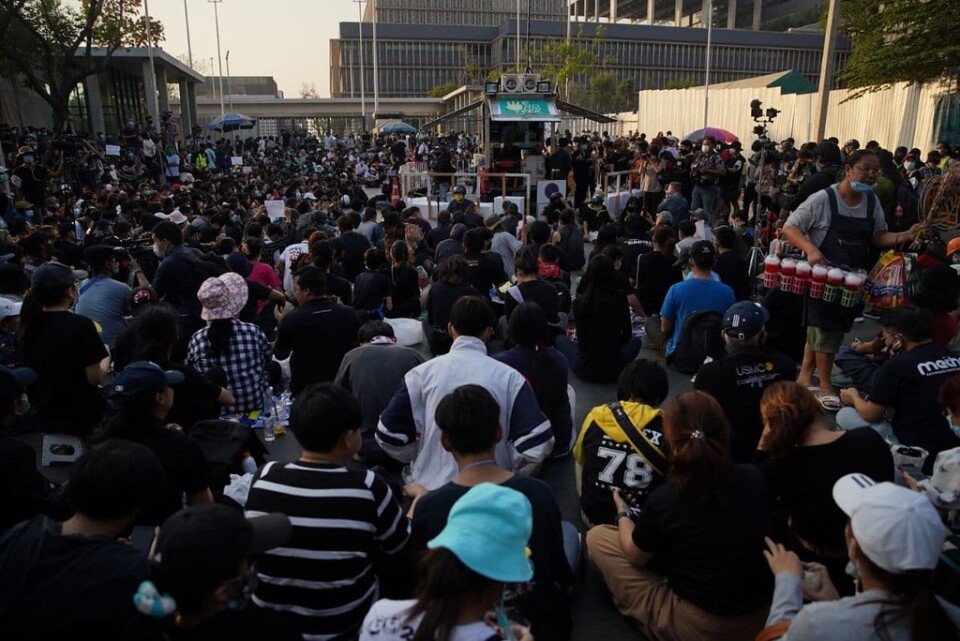 A crowd of pro-democracy demonstrators started off the second day of the protest yesterday, February 20th, by gathering at the MRT Bang Po station before marching to the Parliament at around 4:00 PM. Protest leader Rung Panusaya claimed that the protest would also be peaceful and focused on creative and symbolic expression against Thailand’s Lese Majester law and the Prayut’s government. The protesters handed out brochures on peaceful protesting and reportedly held meetings online prior to the event after previous protests in prior weeks were marked by a hard-line minority of protesters clashing with police, with both sides blaming the other for provocations.

Meanwhile, the four-day-long censure debate had come to an end in the afternoon yesterday. All of the accused cabinet ministers as well as the Prime Minister had survived the debate, you can read more on this here. This allows the ruling government to last a full term after the general election in 2019. As of 6:00 PM., more protesters were seen gathering at the gate of the parliament, showing banners, signs, and three-finger salutes. The road in front of the building was also covered with street art and anti-government slogans to show displeasure against the parliament’s decision.

Shortly before the end of the demonstration at 9:00 PM., the pro-democracy Radsadorn’ group read a statement, claiming that they could no longer rely on changes in Thai politics from the Parliament regime but the group would continue to fight for 3 demands: the resignation of Prime Minister Prayut Chan-O’Cha, a new Constitution, and overall institutional reform.