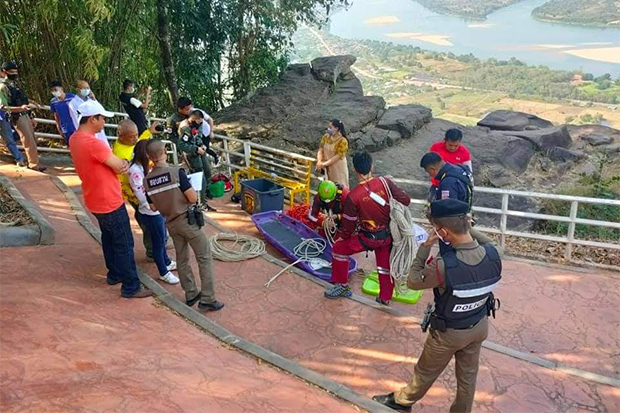 A 52-year-old man fell to his death from a popular viewpoint at a temple in Nong Khai yesterday afternoon, according to local authorities.

The victim, Seksan Thimaphan, 52, had been visiting Wat Pha Tak Seua which overlooks the Mekong River with several friends when the accident took place.

Seksan had reportedly been taking photos from a rock about thirty meters above the ground when he lost his balance and fell, according to friends with the victim.

Police Colonel Sujin Baosuporn told associated Thai press the man had to be rescued by teams of people using ropes to rappel down the surface of the cliff face. The victim was originally from Saraburi and was visiting Nong Khai with his friends on a domestic tourism trip.

The rock in question is a popular viewpoint according to Sujin but does not have any prominent safety barriers on the rock itself, although a guardrail is installed before the rock meant to prevent people to actually climb onto the cliff face, which many do regardless for photos.