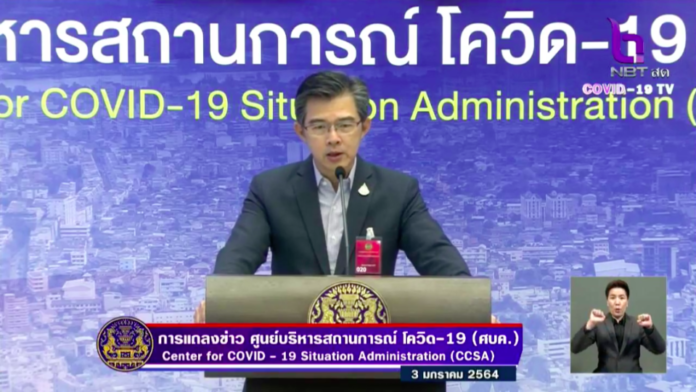 The Center for Covid-19 Situation Administration (CCSA) announced 315 new confirmed cases of Covid-19 Coronavirus at a press conference this morning, 294 among the confirmed cases are domestic, according to CCSA spokesperson Taweesin Visanuyothin.

Among the domestic cases, two confirmed patients from Bangkok and Samut Songkram were connected to a first cluster at Samut Sakhon seafood market and one more patient from Bangkok was linked to a Chonburi cluster.

A number of 37 patients nationwide were found to have been engaged in public spaces and community areas. The cases are in Bangkok 15, Ang Thong 9, Ratchaburi 5, Chiang Mai 2, Nonthaburi 2, Lampang 2, Kanchanaburi 1, Amnat Charoen 1. According to Dr. Taweesin, restrictions of restaurant closures and other closures for various public places in each province, including restaurant dine-in which has become a point of furious debate, will be determined by provincial governors and authorities.

Travel closures are not yet implemented but more travel and health checkpoints will be set up nationwide, especially against travelers from red zones who are planned to travel to less infected areas.

Regarding proposals of tougher measures to prevent the spread of the Covid-19, Prime Minister Prayut Chan-O’Cha has not yet made final decisions and is still debating with the cabinet committee. Meanwhile, local residents should strictly comply and keep up to date with the regulations announced by their provincial authorities.