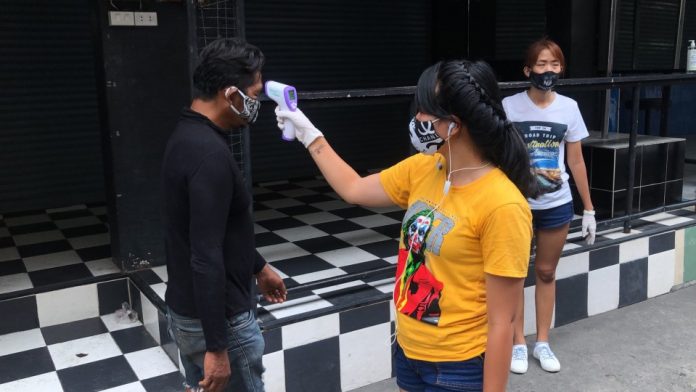 The Center for Covid-19 Situation Administration (CCSA) announced at a press conference this morning that Rayong has an additional 56 cases of Covid-19 discovered in the past 24 hours in the province.

We have previously reported on a large cluster in the province originally stemming from a group of people gambling together. You can read our prior coverage below:

Another 49 local cases of Covid-19 Coronavirus announced by Rayong authorities this afternoon, claims no gambling dens found in province

CCSA Spokesperson Dr. Taweesin Visanuyothin made the announcement at the daily CCSA briefing, however, said that specific details involving the patients, timelines and locations would come from the Rayong Department of Public Health later today. As of press time, they had not yet given an official update.  This brings the total number of cases of Covid-19 in Rayong, which is just South of Chonburi and Pattaya, to 141.  This places Rayong as having the largest number of confirmed cases outside of Samut Sakhon, the epicenter of the new cluster of infections in Thailand.

The cluster in Rayong is believed to have been caused by one of the infected individuals having previously visited Samut Sakhon and then engaged in gambling without masks or protective equipment with a large group of social people.  Additionally, Dr. Taweesin said the contact tracing in this incident was “difficult” as many of the people infected or traced, afraid of potential prosecution for gambling, were lying or not being clear about their timelines and whereabouts.

Both the CCSA and the Rayong Governor have stressed there will be no legal penalties for those involved in regards to gambling and that the government is ONLY interested in Covid-19 at this time and have urged those at risk to come forward and get tested.

Currently, only the “Mueang Rayong” sub-district is under highly controlled measures, which means that nearly all non essential business is closed, restaurants are take out only and other protective measures. However, the province is NOT under a strict lock down/travel restrictions and people may enter or leave, however, are encouraged to stay at home.

The Pattaya News will provide more details on this cluster and cases as they come in this afternoon.