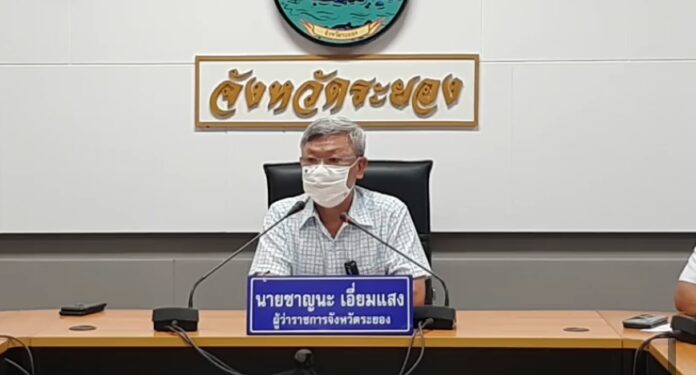 The Governor of Rayong Charnna Iamsaeng announced today, December 26th, 27 new cases of Covid-19 in the province, most linked to an illegal gambling den which was, according to the Governor, making case finding and tracing difficult.

All cases are in the Mueang Rayong sub-district.

This brings the total number of cases in Rayong to 36 from an original case first reported on December 25th.

Today’s 27 new cases are primarily traced to one of the previous confirmed cases of Covid-19 visiting an illegal gambling den. According to Charnna this has made testing difficult as many people are afraid to come forward out of concern of being prosecuted for gambling. He has reassured the public that the Provincial Disease Committee is only concerned with Covid-19 and for those at risk to please come forward, stating they will not face other potential charges.

As a result of the cases Rayong is now considered a highly controlled area, the top level of the new zone system developed by the Center for Covid-19 Situation Administration.

However, only the sub-district of Mueang Rayong is under a version of highly controlled measures at this time, the Governor confirmed. This includes the closures of schools, entertainment venues, bars, nightclubs, shopping malls, non essential retail like clothing stores, gyms, playgrounds, internet shops, massage shops and other similar venues. Restaurants can only offer take away. All events are to be cancelled. This is effective as of Monday, December 28th. The closure is expected to last until at least January 10th.

Beaches remain open and people are allowed to enter and leave the area, stopping short of a full “lockdown” at this time, the Governor added.

Chonburi, home of The Pattaya News, remains a Under High Surveillance area with two confirmed cases.

The majority of Thailand’s new cluster of infections stem from a popular shrimp market in Samut Sakhon which currently is under a hard lockdown with over a thousand cases, most of them migrant workers, confirmed.