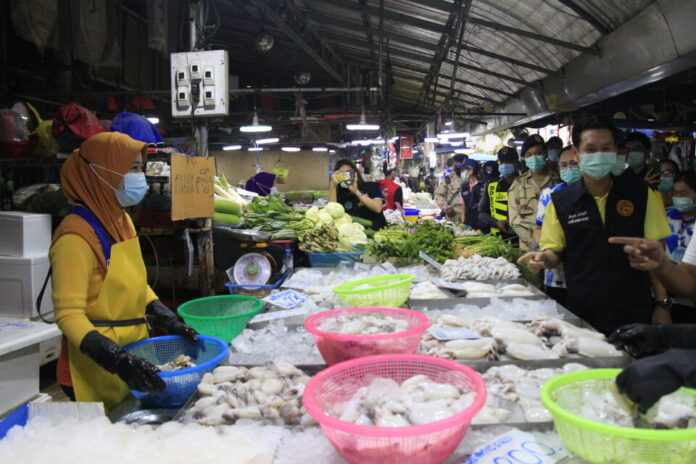 Following a large cluster of infections traced from workers at a seafood market in Samut Sakhon, the Thai Fisheries Department has launched a campaign to certify Thai seafood and aquatic products and restore consumer confidence.

According to the Thai Government, the cluster of infections which has essentially put the Samut Sakhon province into what they are calling a highly controlled area with all non essential businesses closed and people being asked to stay at home is costing the economy an estimated one billion baht a day.  According to the Thai Fisheries Department about forty percent of the seafood in Thailand comes from Samut Sakhon and the current outbreak, despite repeated announcements by officials that there was no evidence seafood could spread the disease, has severely damaged the seafood industry overall.

The new certifications, which so far over sixty exporters have taken place in, will allow seafood to be branded with new “Covid Safe” stickers to assure consumer confidence. At this time, stickers will not come from the Samut Sakhon shrimp market, despite prominent scientists and officials still reassuring the public that seafood is safe.

Earlier this week out of precaution Laos banned the export of seafood to their country despite protests from the Thai Fishing industry, however, remains the only country to do so.

The new certifications will cover not just packaging and material but also the infrastructure behind the fishing industry, such as fishing boats, markets and transport systems. Meanwhile, government officials continue to make multiple speeches a day on Thai media to reassure a nervous public and prevent a significant impact on the livelihoods of those who work in the seafood industry. It is unclear exactly what steps are being taken in the certification process to ensure the seafood is “safe” The Pattaya News notes.

In addition, several prominent seafood retailers such as CP foods are launching an educational PR campaign which will be on media and television to educate the public about the fact there is no risk to catch Covid-19 from eating seafood and reassure the public.