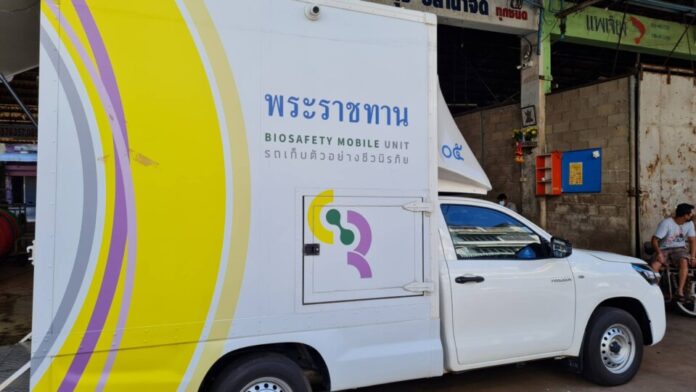 This brings the total to 548 since the first patient, a 67-year-old Thai woman, was identified earlier this week who is a shrimp farmer at a local market and works closely with the migrant community. Samut Sakhon has thousands of foreign migrant workers from Myanmar. Myanmar is currently having a major outbreak of Covid-19 which, according to the Public Health Minister Anutin Charnvirakul may have come from an illegal migrant who snuck into Thailand.

Nearly all of those detected with the disease are asymptomatic (about 90 percent) or have very mild symptoms according to the Ministry of Public Health. Samut Sakhon Governor Veerasak Vichitsaengsri told the press tonight the province will enact multiple restrictions to handle the situation.

Samut Sakhon is being placed under a series of restrictions which include domestic travel restrictions with some areas completely restricted. A full list will be released soon according to the Governor. Nearly all non essential business is being closed in the area including malls, bars, boxing stadiums, fishing ponds, salons, movie theaters, massage shops, nightclubs, entertainment venues, etc. The markets involved are also being closed. The Shrimp Central Market and Sri Mueang Apartments are being placed under a hard lockdown along with an accompanying migrant camp and community.

Restaurants in the affected area of Samut Sakhon will be restricted to takeout only, added the Health Department. All sports and events and other gatherings are to be cancelled. Some schools are closed. The restrictions will run until after the New Year through January 3rd.

Scheduled local elections tomorrow in Samut Sakhon will take place, according to the Public Health Ministry but under strict social distancing rules and other protective measures.

The area is under a requested stay home period of 10:00 PM to 5:00 AM at night, although it is not hard enforced if people have necessary reasons to travel but must have permission from local authorities.. Residents are being requested (but not hard ordered) not to leave the province although certain areas will have hard domestic travel restrictions according to the Governor.

Foreigners are not allowed to enter or exit Samut Sakhon during this period of time according to the Governor. Thais may do so but must register and go through a proper process. They may only travel if it is deemed necessary. Maj. Gen. Wattana Yikhan, Deputy Commissioner of the Provincial Police Region 7, announced that checkpoints have been implemented at all routes in and out of the province and will be manned by officers checking credentials of those traveling.

This is a developing story updates may be made at any time.