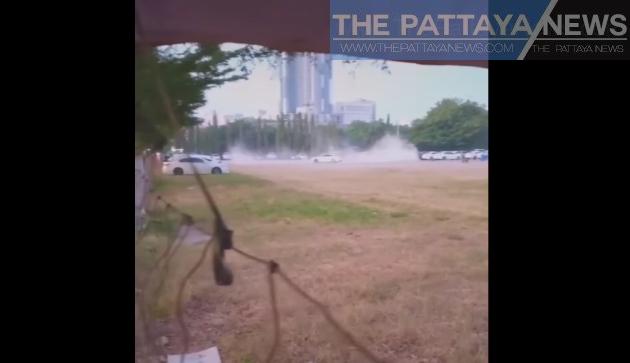 A driver who based on witness testimony appeared to be a foreigner was caught on video drifting a luxury car and chasing after a dog in a Pattaya parking lot over the past weekend.

The video clip had been posted on the Facebook page of ‘Charun Sripho-un’ over the weekend with the message reading “Intoxicated foreign driver in a luxury car chasing after a dog.” It was shared and viewed many times by Thai people who appeared to be upset by the footage.

A Pattaya News reporter asked a security guard at the car parking area of a hotel on Phet Trakun Road about the incident.

The guard, who asked not to be named, told The Pattaya News two men who appeared to be foreigners in the vehicle were driving at speed and drifting at 6:20 AM on Saturday morning, December 12th.

The guard asked them to stop which can be seen on video before they said sorry to the security guard and drove away. The guard stated they appeared to be intoxicated however he believed that they did not intend to hurt any of the stray animals in the parking lot on purpose.

Pattaya law enforcement is reportedly aware of the video although it is unknown if potential charges or an investigation will take place at this time. Many commenters on Thai social media wanted the identity of the drivers revealed.

The footage can be found both on our Facebook watch and tiktok channels with links below.