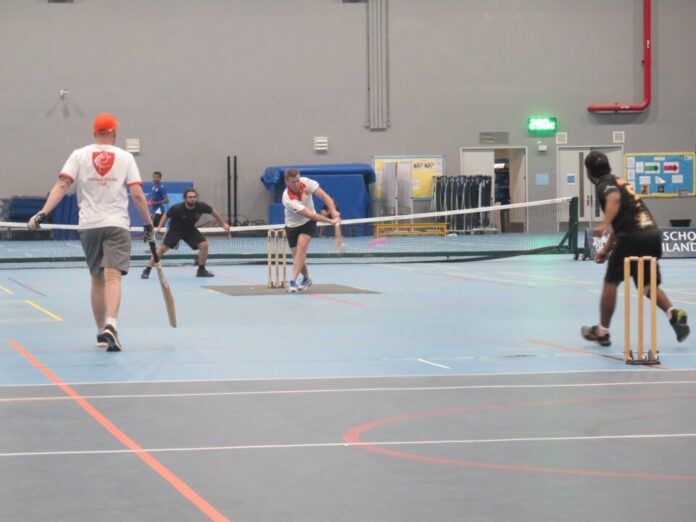 The finals of the Pattaya-RST Indoor Cricket League were played at Rugby School Thailand, Banglamung, on 7 Dec 2020.  PCC played LOTB for the 3rd and 4th place. They had played each other in Round 1 where PCC were roundly trounced, but this time, PCC were fielding an A-team.

PCC won the toss and asked LOTB to bat first.  Molin and Terry faced Wez Masterton.  A good over for PCC as only 8 runs were conceded but the batsmen got in a mix-up and Molin was run out by Trevor Moolman.  Matt Harkness bowled next and Molin scored steadily.  Simon Weatherill bowled the 3rd over and was smashed around the hall by Molin who finished on 27 n.o. 35 for 1 after 3 overs and a good start.  LOTB struggled from this point on as wickets fell steadily and runs were scarce.  Trevor bowled Gaurav on his second ball and was unlucky not to hold a fierce drive from Ricky, whilst Wez bowled well for just 7 extras.  Bernie Lamprecht bowled the pairs’ final over and Gaurav (4) was run out through another mix-up.  Ricky (9) was then caught behind by an excellent reflex catch from Luke Stokes, thus Bernie had 2 for 7 in one over.  43 for 4 after 6 overs and LOTB were under the cosh. The final 3 overs were batted by the accomplished pair of Sajan and Aman.  Matt bowled and kept things tight with only 8 conceded.  Trevor had Sajan (6) bowled for 10 off the over and so Wez took the last over.  Sajan decided to leave a ball he thought was going down leg and lost his leg stump. 5 dot balls with a wide left LOTB on 54 for 6 and facing an uphill task.

The usual openers of Wez and Bernie took the crease against Ricky who conceded 9 runs but had Bernie (14) caught by Gaurav at cover. Aman bowled a loose-ish over by conceding 11 runs.  Terry bowled at his usual searing pace for 8 and leaving PCC on 27 for 1 after 3 overs.  LOTB slightly ahead.  Simon Weatherall and Trevor batted next against Ricky.  8 off the over but the scalp of Trevor who got himself run out.  Simon led a charmed life as he was dropped twice.  Aman also conceded 8 runs but he had Simon run out by Molin and he bowled Trevor.  Trevor was not having a good batting day. Terry bowled the 3rd over for this pair and the circus continued as Trevor should have been run out but the bails stayed on and Simon was dropped for the third time.  Trevor seemed to have forgotten how to call and was determined to get himself run out again, which he did.  24 runs added but 20 lost, which could so easily have been 40 lost.  31 for 4 after 6 overs and 24 needed to win.  Enter the rocky steady pair of Matt and Luke.  They kept their heads and their wickets.  By the last over they were ahead and Terry bowled the last over.  Normally very economical, he was belted for 21 and Matt (22) and Luke (24) gave PCC a victory by 26 runs.  Revenge for the first round loss and a 3rd place finish.