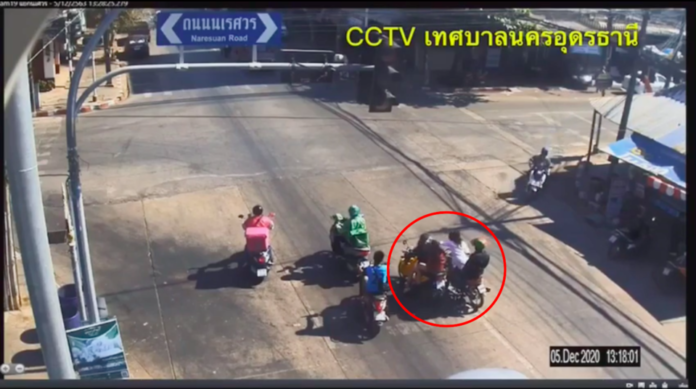 Two innocent people were killed and five others were injured after a raging motorcyclist was riding a motorcycle and spontaneously stabbed multiple civilians at the Naresuan Road Intersection in the Udon Thani province yesterday, December 5th.

Police from the Udon Thani Provincial Police Station were alerted of the shocking incident at around 1:30 P.M. before arriving at the scene and discovering two students were lying in the road and severely injured from stab wounds.

Unchaya Bunyuan, 16, was seriously injured from being brutally stabbed in her neck. She was later pronounced dead at Udon Thani hospital. Another student, Nattawadee Phoprom, 17, was also injured from a stab wound in her mouth and being treated at the same hospital. 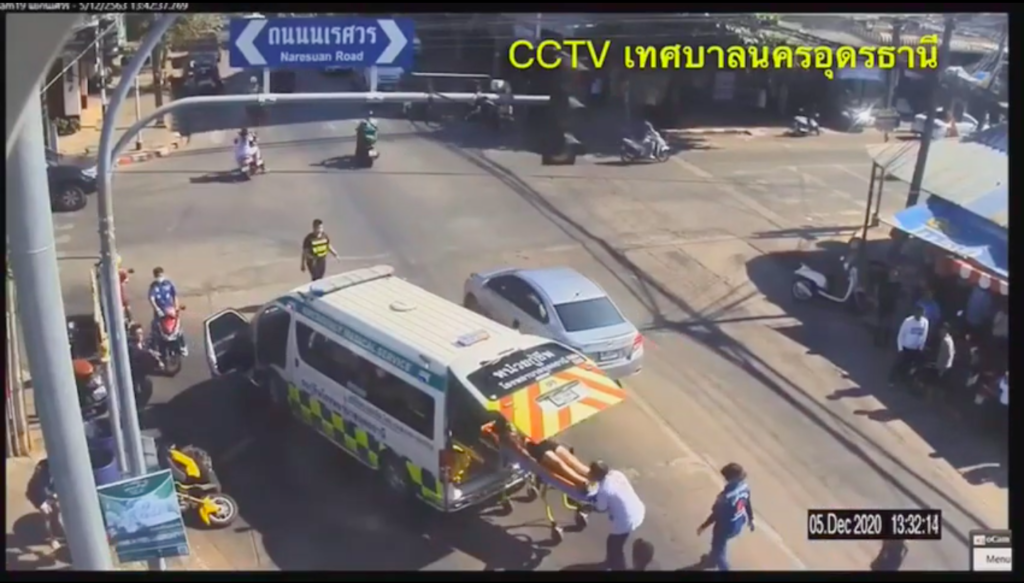 CCTV footage at the intersection also captured a long-haired male motorcyclist leaving the scene with an orange-black motorcycle before slashing another 45-year-old woman standing 100 meters away on her cheek and then attacking another 20-year-old victim who was located another 100 meters away. All of them were rushed to Udon Thani Hospital.

The raging man reportedly went on riding to assault a 16-year-old boy and a 33-year-old female pedestrian and viciously killed a 22-year-old university student, Chonlada Hinkham, who was riding on a motorbike along Surakan Road.

A total of thirty police officers and rescue volunteers gathered and eventually captured the alleged assailant, Ithipon Imphueng, age not given, who was carrying a folding knife in his hand. During an informal questioning, he was only mumbling in random words with slurred speech that did not make sense, according to the police.

His friend, who was only named to the press as Subin, told the police that he was also riding on the same motorcycle but suddenly took off after seeing his friend “completely lose it” in his words and take out a knife stored in the motorcycle and began stabbing other people at random.

According to Subin’s statement, the pair were leaving from an annual festival in the city to drop him off at his home but Ithipon began suspiciously riding around the area in a circle. Their vehicle stopped for a red light at the Naresuan Road Intersection when Ithipon began viciously attacking the first two women riding next to him. Subin shockingly took off before his friend continued riding and began attacking many more victims. Subin claimed Ithipon had not shown any signs of problems at the festival or before the incident began and there were no traffic incidents that could have started road rage.

As of this afternoon, Ithipol remained in police custody at Udon Thani Police Station and would be examined for psychological testing to prove whether he was suffering from any mental condition during the assault or not.

However, a psychiatrist told the press that Ithipon was able to sanely respond to all the questions but he stated that he did not recognize what happened during the time of the attack.

“The alleged perpetrator had no history of psychiatric treatment in Udon Thani or nearby provinces. But he did have a history of substance abuse and alcohol use. However, the psychological examination and the results of the urine and blood tests would need some time to confirm the exact information of his physical and mental conditions,” the psychiatrist stated.

Meanwhile, Udon Thani Provincial Justice Office will provide monetary assistance to the family of the two deceased for 110,000 baht each. Udon Thani’s Social Development and Human Security Agency are also assist the families of the victims with psychological support.