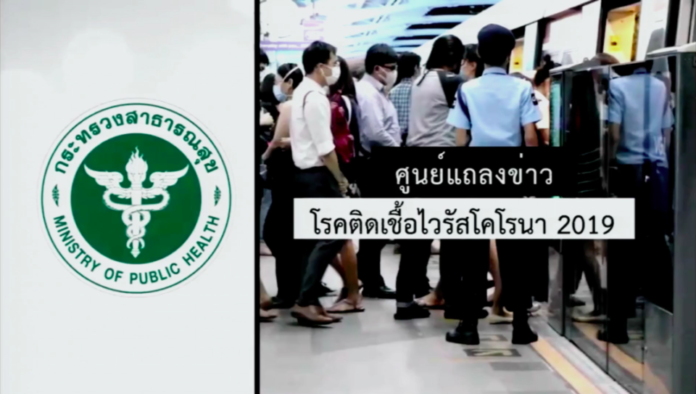 All of them were reportedly working at the same entertainment venue in the Tachiliek district of Myanmar before illegally crossing the border to Chiang Rai province last week and returning to their hometown on the following day without performing state quarantine. The first female returnee from Phayao, 28, arrived in Chiang Rai province on November 27 via natural route and skipped quarantine before riding a motorcycle with a Burmese rider to a bus terminal in Mae Sai and hiring a taxi-meter from there to her friend’s rental apartment in Mae Sai district on November 28. She was reportedly staying alone and only traveled to a local market to buy dinner in the evening, wearing a face mask.

On November 29, she went to Singha Park in the evening with her boyfriend who was driving to pick her up from Phayao province. They were reportedly hanging out and wearing masks at a beer garden and did not enter the main crowded stage.

The couple left Chiang Rai on the following day, November 30, and then visited Chiang Mai province where she had conducted a Covid-19 test at a private hospital before returning to her hometown in Phayao with her boyfriend via private car. She went to a local hospital again in the province as she was reportedly having suspicious symptoms of Covid-19 at midnight.

Her results from both hospitals revealed positive for the coronavirus. She has been isolated at the hospital and under the close supervision of Public Health officials since December 1. Her contacts are being traced, tested and quarantined. 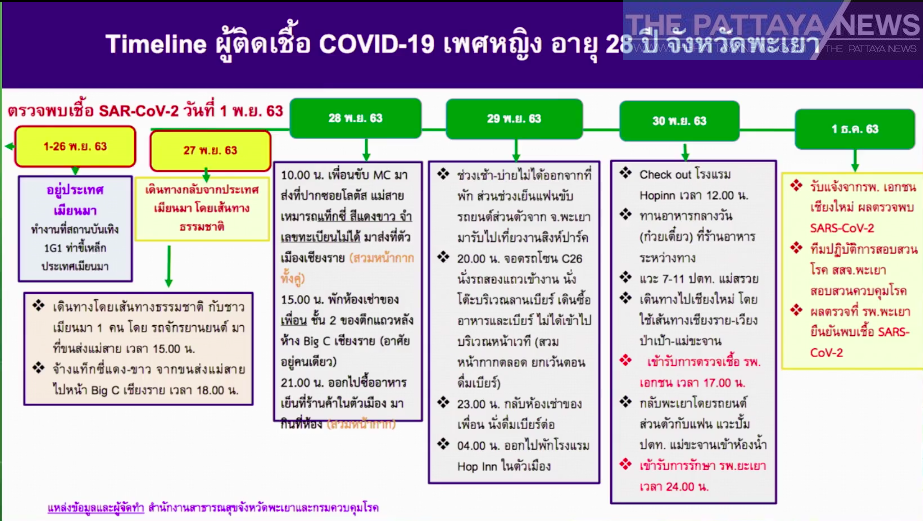 The second case involves a 21-year-old woman from Bangkok who arrived in Chiang Rai province via a natural route on Saturday, November 28, and did not perform state quarantine. She was reportedly staying in a hotel in Mae Sai district for half an hour with two other friends when she reportedly started to have suspicious symptoms of fever and sore throat.

The patient then traveled to Chiang Rai International Airport via Grab Car before flying to Don Mueang Airport of the capital with Nok Air Airline, Flight DD8717, at around 1:40 PM. She also hired a taxi-meter from the airport to meet her partner at a condominium in the Udom Suk area at 5:00 PM.

On Sunday, November 29, she went to a nearby clinic in the area to cure her fever at around 4:30 PM. before she was advised to visit a local hospital in Bang Na district, where her initial result of the Covid-19 coronavirus has proved positive. The third patient, 25, from Phichit was reportedly a friend with the one from Bangkok and traveling together from the border to Don Muaeng International Airport before taking another domestic flight to Phitsanulok airport on November 28. Her friend then came to pick her up to Phichit where they reportedly had dinner with 4 friends at a local restaurant without wearing face masks.

On November 29th and the 30th, the returnee had visited several places for lunch, dinner, and pedicure. She reportedly visited Bird Bar and Crocodile Rock restaurants in Phichit every evening. These places are now under investigation by officials and staff being tested.

She asked for a Covid-19 test on December 1 as she heard that one of her friends tested positive for the virus. She revealed no symptoms but was found with a positive test at a local hospital. The patient is now being state quarantined at the province. 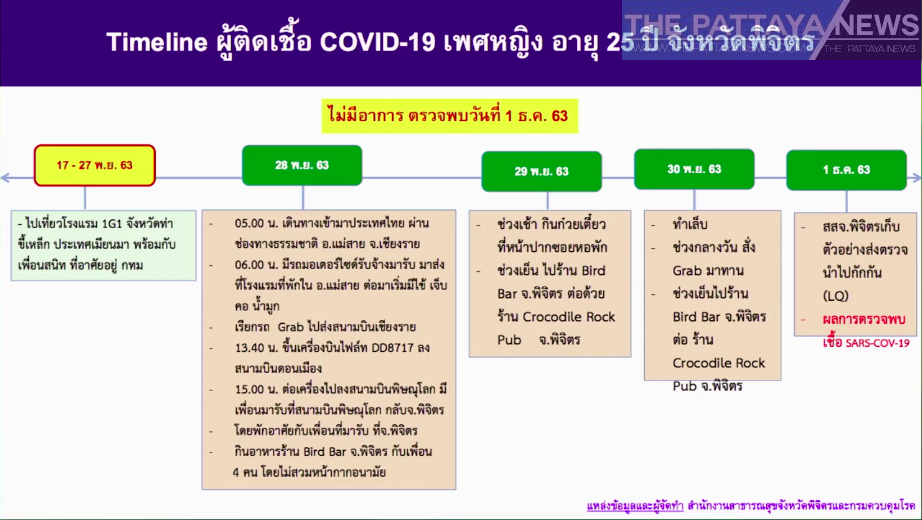 The fourth 36-year-old patient from Ratchaburi had been reportedly suffering from suspicious symptoms of fever and sore throat since she was working at the entertainment venue in Myanmar on November 26. She illegally crossed the border on November 29 and immediately traveled to Chiang Mai International Airport by her friend’s car with 2 people without performing state quarantine.

She then flew to Don Mueang International Airport via Thai Lion Air at 10:40 AM. and arrived in Bangkok at 12:00 PM. before taking a taxi meter to Mochit Bus terminal. The woman then took a bus to Ratchaburi and was dropped off in front of Big C Ratchaburi, where she took a motorcycle taxi to a private residence in the province. 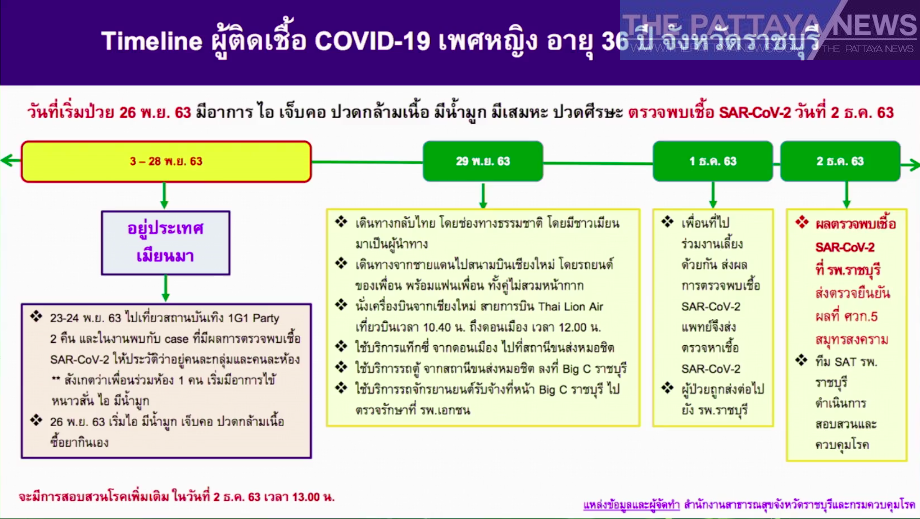 The two female returnees, whose ages are 23 and 25 years old, who are currently in Chiang Mai also went to a local hospital for a Covid-19 test on November 30 following the announcement of her infected colleagues. Both of them tested positive on the following day and are now being isolated at Nakorn Ping hospital under the supervision of Chiang Mai health officials. They were with a third person, the seventh, who is so far negative for the Covid-19 virus. These two returnees are asymptomatic, said officials.

The seventh illegal returnee has not yet been found positive for the virus but is performing a local state quarantine under close supervision as well. More details will be revealed as soon as possible, according to Sophon Iamsirithavorn, director of the Division of Communicable Diseases.

As previously stated, this brings the total number of cases to ten over the past several days associated with young Thai women illegally entering the country to flee a strict lockdown in Tachileik, Myanmar. Read more about the situation there below:

Covid-19 situation worsens in Tachileik, Myanmar town on Thai border where recent domestic Covid-19 cases in Thailand have come from