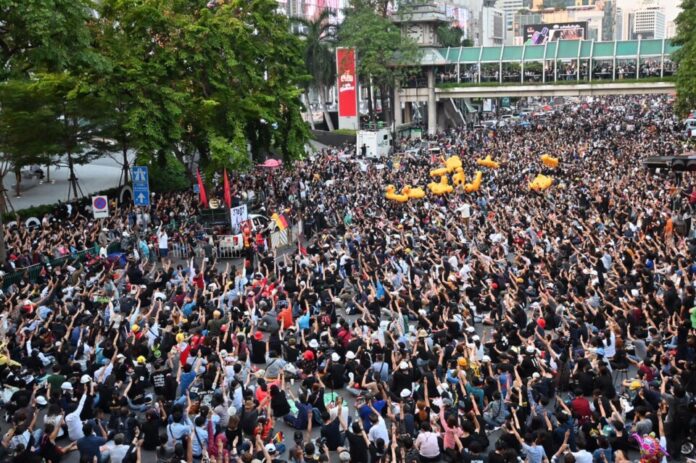 Pro-democracy protesters marched from Ratchaprasong intersection on Royal Thai Police Headquarters in downtown Bangkok yesterday, November 18, to express their anger after many protesters were injured from major clashes with police riots on Tuesday.

The demonstrators had started peacefully massing over the business intersection shortly before 4:00 PM. following their prominent protest leaders’ announcement of escalating protests in front of the House of Parliament on Tuesday night.

At least 55 people were injured in total from all sides during skirmishes with the police and royalist counter-protesters on Tuesday. 32 of them suffered from high-pressure water cannon injuries with teargas chemical-laced water and reportedly six injured people had gunshot wounds during clashes with opposition protesters. Royal Thai Police have repeatedly denied using firearms in any way, shape or form. 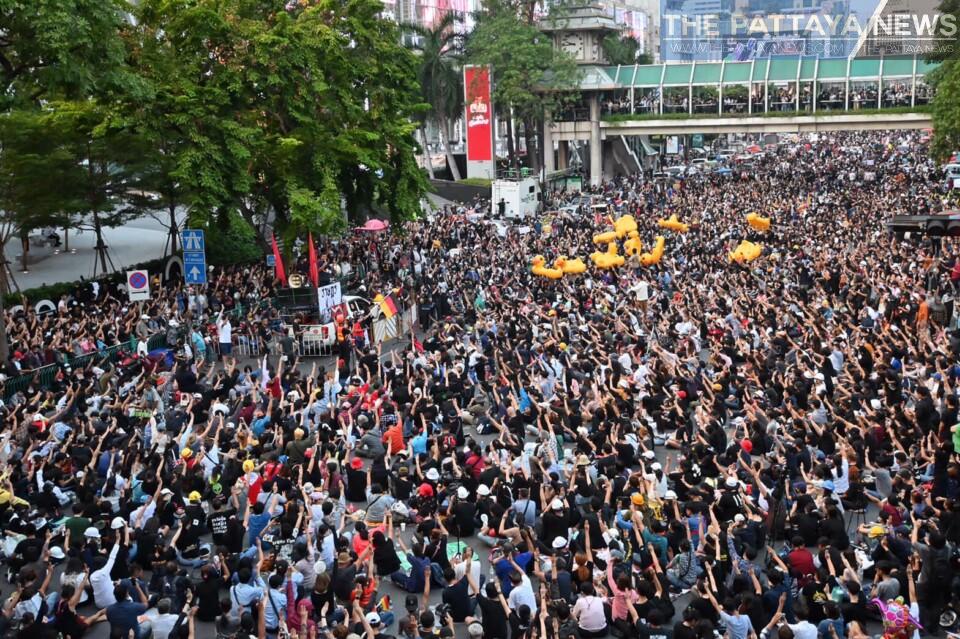 The large crowd had packed the whole intersection before began marching to the Royal Police Headquarters on Rama I road at around 6:00 PM. Protest front-liners were seen carrying water guns and tins of paint colors which they planned on using as a mocking response to what the authorities had done towards them during the confrontation. Some protesters also managed to rent their own water truck.

Inside the headquarters, barbed wire fences, dump trucks, water cannon trucks, and Long Range Acoustic Devices (LRAD) along with hundreds of police lined up were tightly deployed by the entrance to handle the situation. Pro-democracy protesters started chanting and aggressively yelling at the police from outside the headquarters before spraying it with buckets of paint and water pistols. The road nearby was also filled with words and artworks against the police, the government, and the highest institution.

Despite the anger and call for more action in the escalating protest claimed by the prominent leaders, the demonstration remained overall peaceful as both police authorities and pro-democracy protesters stayed on their side of the fence and did not confront one another directly. 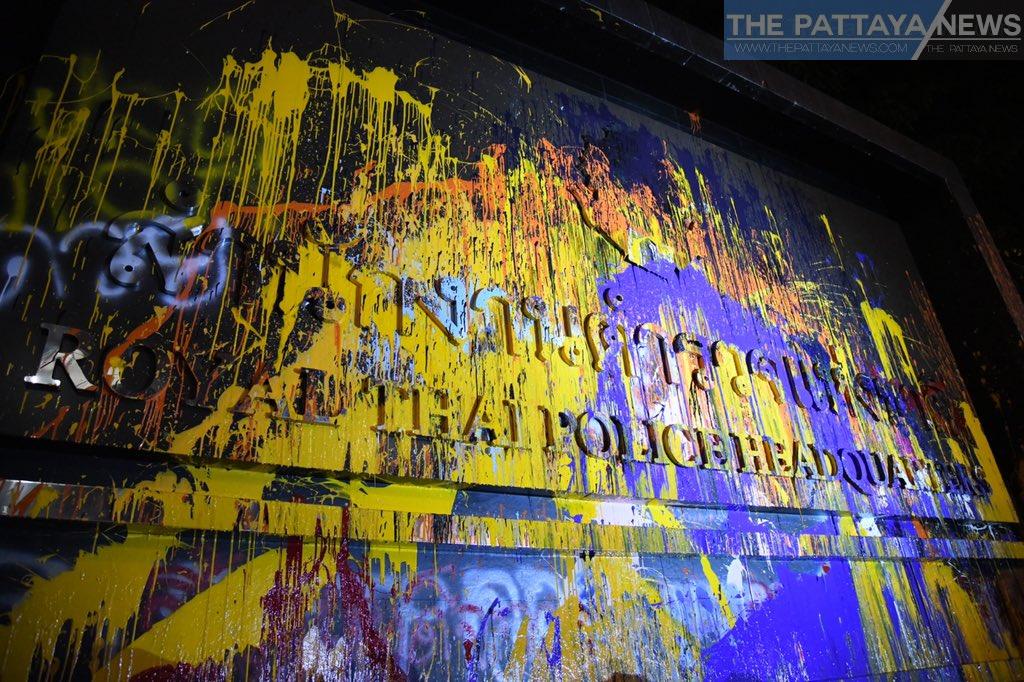 The protesters had left their mark in a blaze of color on the fence, the plaque of the police agency, and nearby roads before calling off the end of the demonstration at around 8:20 PM.

One of the leaders, Panusaya “Rung” Sithijirawattanakul, said the next rally will be next Wednesday, November 25, at the Crown Property Bureau after the so-called “people’s draft” of amendments to the constitution had been rejected during the parliament session that evening. 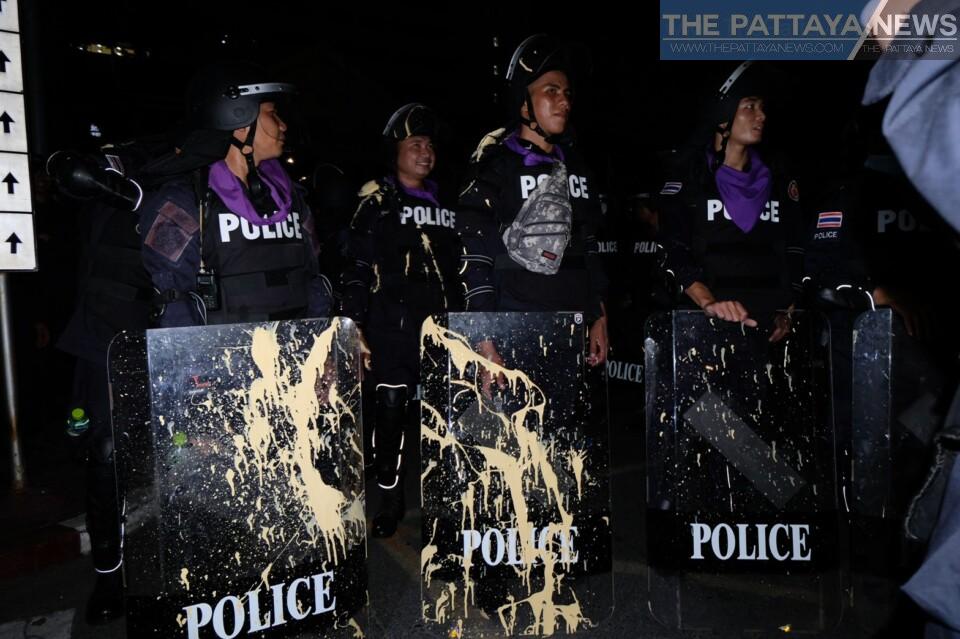 Police Colonel Kritsana Pattanacharoen, the deputy spokesman of The Royal Thai Police, spoke to the press after the gathering that inspectors of Pathumwan Police Station would collect evidence and investigate the overall damage before charging protesters for vandalism.

It was also reported that demonstrators used a slingshot to allegedly attack police officers with crystal balls and splashed oil paintings on one of the officers in his eyes and mouth. The police are currently in the process of looking into how many police have been injured, according to the deputy spokesman.

As of this morning, the police from the Technology Crime Suppression Division (TCSD) had arrived and examined the damages at the nearby areas to estimate the damages from the protest. 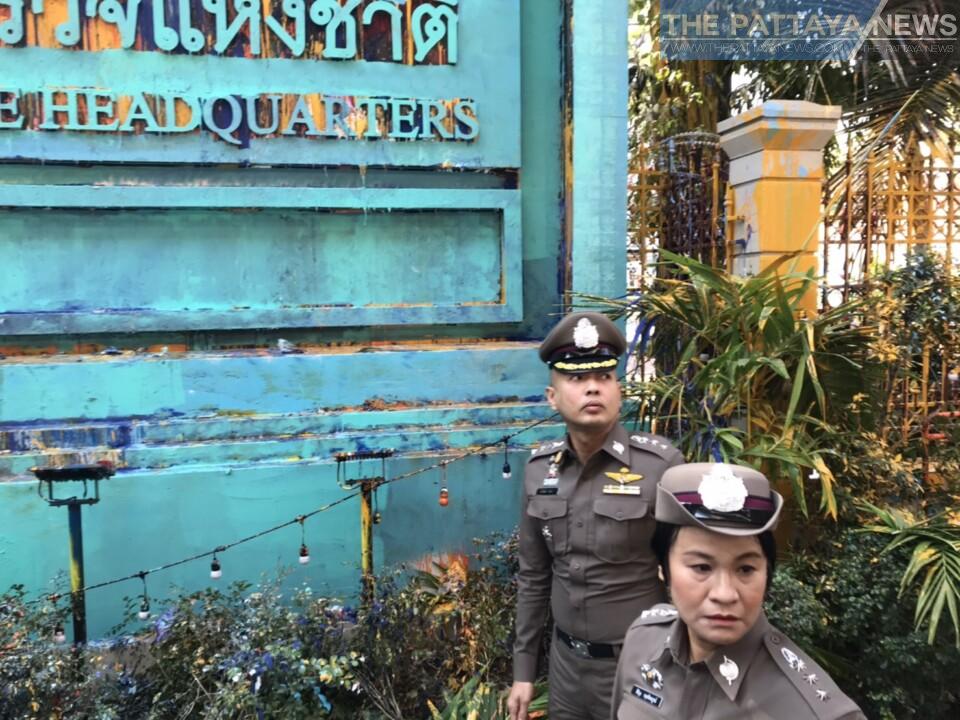 Reportedly about 13 CCTV cameras installed nearby the headquarters had been damaged and covered in paint. One of the police cars from Suwinthawong Police Station was sprayed and its tires punctured, according to police. Police’s plaque, signs, walls, and many fence lamps were also reportedly damaged as well, according to the TCSD inspectors.

TCSD Deputy Commander Siriwat Deephor warns that the pro-democracy protesters has their right to gather and make themselves heard as long as it is peaceful. The destruction of government property that comes from the nation’s tax is not the right thing to do.

Initially, some protesters will be charged for causing the property loss, violating the Cleanliness Act at Pathumwan Police Station, and physically assaulting three officers from the Border Patrol Police. Meanwhile, the total damage value is being assessed.