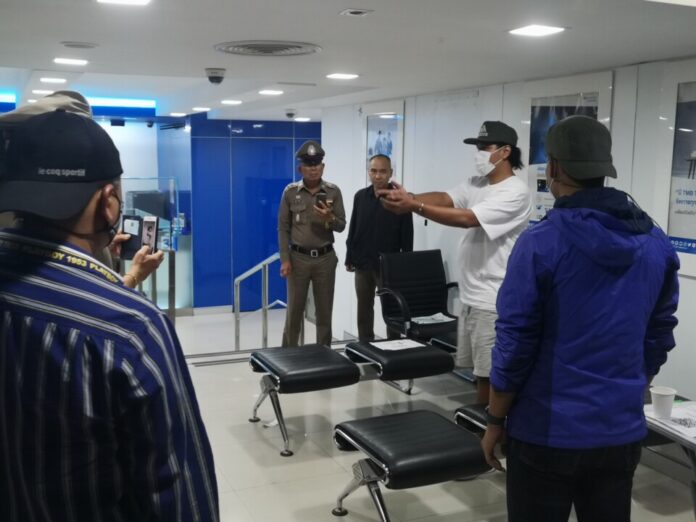 A Thai national was placed under arrest yesterday, November 12, after allegedly robbing 416,000 baht from a bank in the Vacharaphon area of Bangkok earlier in the afternoon.

Local police officers arrived at a Thanommitr branch of the Thai Military Bank in the capital after being alerted of the robbery incident which occurred around 3:00 PM.

Footage from security cameras of the bank showed a Thai man, who was seen wearing a camouflage shirt, black trousers, a black hat, and a health mask, was entering the bank as a customer before declaring himself as a thief, drawing an automatic shotgun, and forcing a bank employee to put the stolen baht in his bag.

He instantly fled the scene as soon as he received the money before being seen on CCTV calmly counting the stolen money by the temple of Wat Siripong Thamanimit, located only 300 meters from the bank, where he also reportedly dumped his clothes at a nearby dumpster. This action helped police track and catch him.

The 35-year-old alleged robber, Kanchanok Srisawat, was captured six hours later at his temporary rental place in a Thanom Mitr Park apartment. He was then taken to Khannayao Police Station for interrogation.

Kanchanok allegedly admitted to the bank robbery, reasoning that he needed a huge amount of money as he was recently fired from his job three months ago and was heavily addicting to online gambling.He had reportedly already spent 16,000 baht of the stolen money on gambling.

The authorities had confiscated the rest of the 400,000 baht of stolen money before taking him to the Ratchada Criminal Court for a further detention request today.