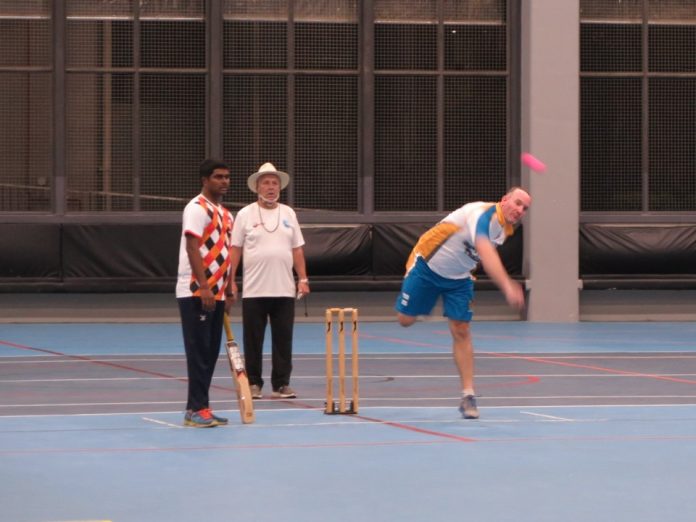 Round 2 of the Pattaya-Rugby School Thailand was played at Rugby School Thailand, Banglamung. PCC versus RST Vipers was the first of three matches on 2 Nov 2020.  Unfortunately, it was another match where PCC scored well but lost too many wickets and give away too many extras.

PCC lost the toss and were asked to bat, which was helpful as Jainish was stuck in traffic.  Simon Weatherill and Trevor Moolman opened. The first ball was a corker, typical Chris Lindop, quick, full, in-swinging, accurate and caught Simon by surprise.  An appeal for LBW but luckily it pitched just outside of leg stump and Simon got a leg bye.  Chris had his revenge by taking Trevor’s wicket 3 balls later.  Ryan bowled next and whilst the batsmen scored runs, they tried for one too many and Simon was run out going for an iffy second.  Lewis Madd bowled the third over and had Trevor caught but they still added 13 off the bat.  21 for 3 off 3 overs – it could have been a good start.  Bernie Lamprecht and Luke Stokes went to the crease and took on Lewis, Hugh and Will Howell.  Bernie clobbered two 6’s and added 20 runs whilst Luke added 12 for no loss.  A respectable 65 for 3 after 6 overs.  It all went a bit pear-shaped in the last 3 overs as Ryan and Chris tore into the tail enders and took 5 wickets for only 8 off the bat.  Venkat was having an awful day and was run out (again) and bowled twice which allowed Ryan to get a triple wicket maiden.  Chris took another wicket, Jainish, in the last over to earn figures of 3 for 20 whilst Ryan got 3 for 14.  PCC finished on 56 for 8.  A disappointing result.

RST Vipers were never under any pressure.  Will Howell and Chris Lindop opened against Trevor Moolman. A brisk start made 16 runs off the first over whilst Jainish managed some dot balls to concede another 8. Bernie bowled the pair’s third over and had Will Howell caught off the first ball. 12 more runs followed to give RST Vipers 31 for 1 in 3 overs, 15 of which were wides.  Chris and Hugh took the crease against Simon Weatherill.  Although the runs rate ticked along, Simon managed to takes Hugh’s wicket.  Venkat bowled next but had an expensive over due to 9 wides.  Trevor stemmed the flow of runs with 3 dot balls to leave RST Vipers with 70 for 2 off 6 overs.  Ryan Driver and Lewis Madd were the last pair of batsmen. Simon bowled Lewis Madd first ball but runs continued to flow from Ryan’s bat.  Jainish bowled the penultimate over and completely lost his line with 15 wides and 11 off the bat.  Bernie bowled the last over and Ryan took 20 runs to achieve a record 33 in 3 overs.  Ryan and Lewis added 57 to bring up a record 127 for 3 and a win by 71 runs – another record.  PCC had given away 39 in extras – all wides.

Other matches on the night were RST Pythons v RST Cobras, RST Vipers won by 12 runs and Warriors v Lords of the Beers (LOTB), Warriors won by 29 runs.  RST Vipers lead the league table with 57 points, whilst PCC trail in last place with 17.