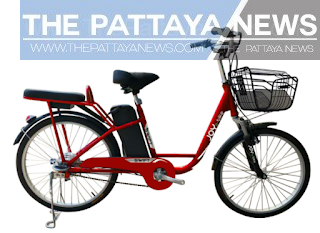 The following is a reader mail/opinion. Their opinions are their own and may not reflect those of The Pattaya News Company Limited.

I ride an e-bike. That means a bicycle with an electric motor (and a heavy removable battery – I need to get my exercise somehow) that gets me around my neighbourhood. It has a range of about 20+(ish) km, speeds along on the flat at about 25km and costs practically nothing to run. Over the nearly 2 years I’ve had this e-bike I’ve spent about 800 baht on repairs and such a small amount recharging the battery I can’t actually see it on my bill. The best estimate I’ve seen is about 0.036 baht per kilometer, or about 1/6th the cost of a small gas powered motorbike. There are drawbacks to a low powered bike like this, mainly speed and range.

Now, I’m nearly as old as dirt so riding a ‘push’ bike, although a healthy option, is not practical if I have to go up that long hill to Pratamnak. I ran out of juice (electricity) one afternoon and had to actually pedal my way up…puff, puff. Lots of you are ridiculously healthy for your ages but I can be stunningly lazy at times, so powered transport is a necessity. Luckily all I really need it to do is get me to the pub, the Food Store and the main baht bus route.

Another major drawback is my male ego and macho standing in my community. I mean come on, a big guy in his mid 70s tooling around on a step through bicycle with a basket in front. My son says that would be okay if I were a “punk” because that’s the transportation of choice for them, but then I’d have to get a Mohawk haircut and dye it green to pull that off. Pass.

So what are our options? Since I bought mine nearly 2 years ago (250 watt motor) there has been many advancements. The motors are bigger faster and the batteries have a much longer range. You can, as of this writing, still operate a bike under 500 watts (499) without a license or insurance. Above 500w it’s treated exactly the same as any gas powered bike; registration, license, insurance, police spot checks and all the benefits that come from that.

There are fat bikes, mountain bikes, 24 gear road bikes, commuter bikes and more that have electric pedal assist and others, like mine, that have a throttle as well. Again, they range in motor size (normally) from 250w to 2,000w. Yeah, there are some with 5,000w (and up) motors but, who would want to be on a bike with skinny bicycle tires (2-3cm) at 90 or 100 km and hour…shudder.

There are many changes in bigger motorbike styles as well. There are many new ones that look like any 125cc Honda or Yamaha you’d see. They are as small as 350w but some range up to and above 16KW and even more. Harley-Davidson has a one called the LiveWire, it has a 15,500w motor (105 hp) so the sky is literally the limit.

My complaint right now here in Pattaya is a lack of availability. I had to order my little e-bike, sight unseen, from Bangkok and hoped for the best. That worked out well but now i’m looking at the newer motorbikes at 40,000 to 60,000 baht, I’ll need to sit on one first before I buy. It’s sadly typical of Thailand in that Bangkok is the center of the universe (I come from Toronto which is actually the center of the universe, everyone knows that!) so smaller cities like Pattaya are overlooked. There’s a opportunity ripe for the picking.

Over the years I’ve become a bit of an advocate for Electric Vehicles (a few people have told me to shut up about them already) as they develop into mainstream transportation. They have zero emissions during operation, (everything uses energy when its built, so give that petro-argument a rest) maintenance is minuscule by comparison to internal combustion engines and longevity, we don’t know that. Teslas aren’t wearing out – yet.

Everyday there are advancements in battery technology that will extend range and reduce charging time. EVs are the wave of the future. They will help give us cleaner air, slow climate change and most of all, reduce costs for people struggling to make a living. The local mechanic in your neighbourhood will need to upgrade their skills a bit but the guys up the street from me can fix anything on wheels.

These bikes are not your granddad’s e-bike (like mine) they’re our kids future.