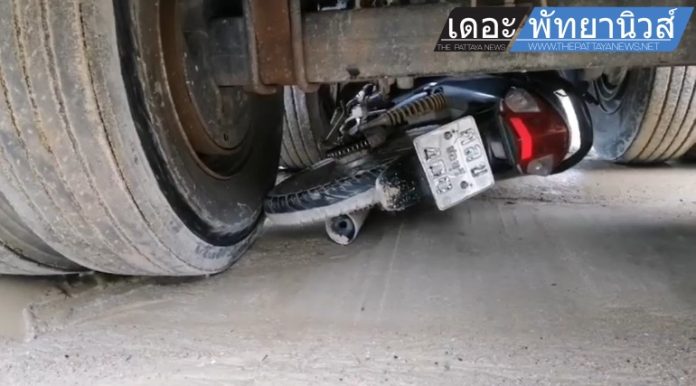 A motorbike driver was pronounced dead at the scene today after being run over by a trailer truck in Si Racha. The truck driver was not found at the scene and left for unknown reasons before law enforcement officials arrived.

Police were notified of the accident this morning on a local road in the Bang Phra area.

Police, emergency responders and The Pattaya News arrived at the scene to find a large trailer truck on the road. A motorbike was found under the truck. The motorbike driver, Ms. Jamrong Watsuwan, 48, from Uttaradit, was found deceased in front of the truck. She is believed to have died instantly. 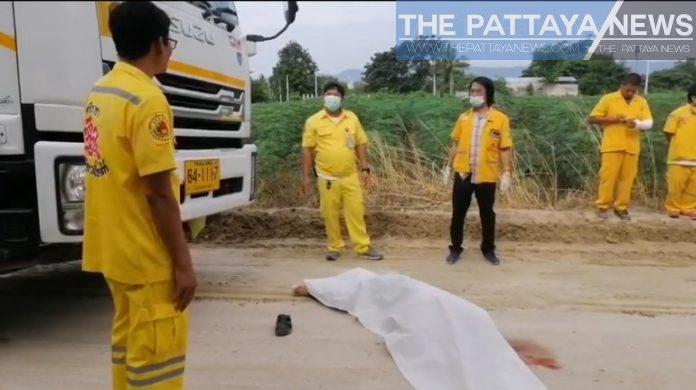 The truck driver, who was identified by police as Mr. Somsak Jandakaew, 49, was not present at the scene of the accident.

A witness, Mr. Banjong Tanasomboon, told police that Ms. Jamrong hit the back of the truck when the truck driver was backing up his vehicle. It is unclear if proper signals or lights were being used, according to the witness.

Si Racha police are continuing their investigation for further potential legal action. Should the driver not turn himself in as promised they stated they will also issue an arrest warrant for the driver.