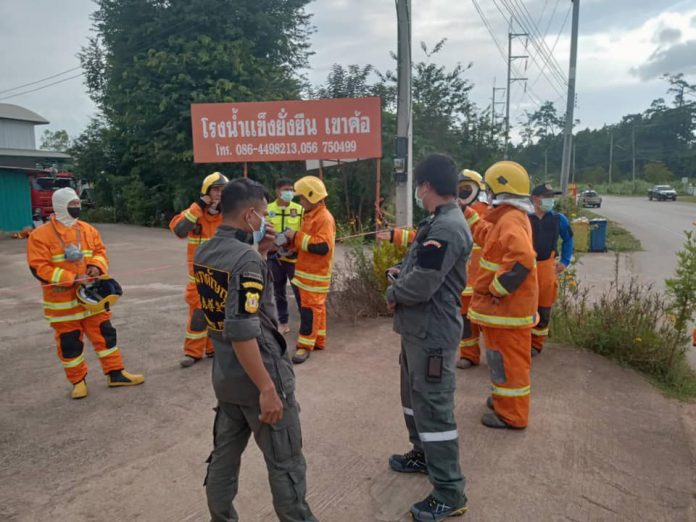 Local households living in a 2-kilometer radius were told to evacuate after an ammonia leak at an ice factory in the Khao Kho District of Phetchabun yesterday, October 7, sparking panic and causing rapid eye and nose irritation in several villagers nearby.

The gas was reportedly pouring inside the factory around noon before spreading a pungent smell into households as the leak became beyond control, according to the factory staff.

Phetchabun Governor Krit Khongmuang ordered the emergency evacuation of residents as fear spread they might inhale the toxic gas and visited the scene around 4:30 PM to supervise the situation along with firefighters and public health officers.

The officers had closed roads nearby before they were seen wearing protective suits and used seven fire trucks to spray the area with water to reduce the spreading gas.

The leak was reportedly under control in a small radius around 5:30 PM. The officers had to stay monitoring the scene for several hours until the toxic gas eventually evaporated and disappeared.

The governor told the press: “All people living in a 2-kilometer radius of the factory had been evacuated to a temporary camp at Camp Son Temple. We also ordered an emergency survey of children, the elderly, and sick people to see if they had inhaled a dangerous amount of gas.”

“The ammonia leak was now under control.”

Meanwhile, police investigators are examining for the actual cause of the leak and are questioning the factory staff. It is assumed that the incident was caused by the deterioration of a machine that had been used for many years.

People with minor irritations had been reportedly treated at the scene of the incident. No deaths or severe injuries were reported.