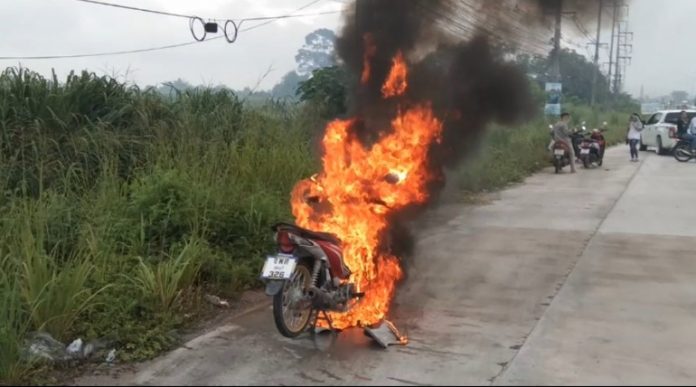 A school teenager had a lucky escape from injuries after his motorbike caught fire while he was riding to his school in Ban Bueang this morning.

Fire fighters were called to put out the fire at 10:30 AM on No 344 Road (Bueng – Klang) in the Nong Chark sub-district.

The fire fighting team and The Pattaya News arrived to find the boy’s motorbike was totally engulfed by flames. The firefighters took only 10 minutes to douse the blaze but the motorbike had already been totally destroyed. 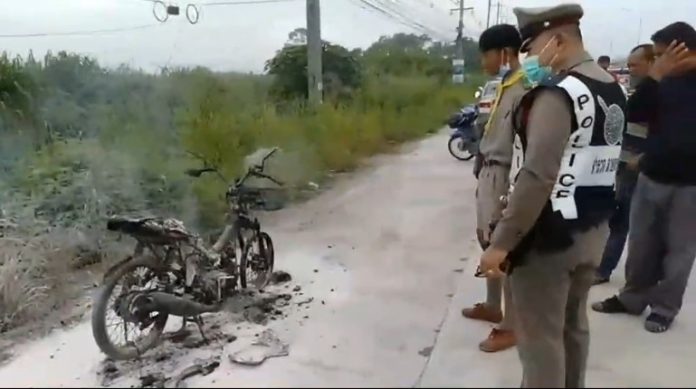 The fifteen year old school teenager, whose name was withheld due to his age, told The Pattaya News that he was riding his motorbike to school. He began to notice issues with the bike and stopped to take a look at fuel line. When he started the bike again the motor vehicle sparked and reportedly set on fire. The teenager quickly managed to escape from the blaze.

Mr. Pat Suachom, 55, who was riding a motorbike behind the teenager said he saw the fire erupt from the motorbike and called police for help with his cell phone.