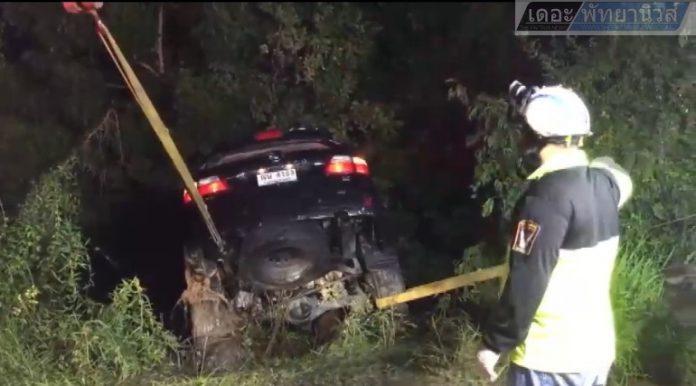 Four people have died while three others sustained serious injuries after a SUV lost control at a curve and plunged into a water-filled ditch in the Panat Nikhom district yesterday morning.

The Panat Nikhom Police were notified of the accident at 5:00 AM in the Rai Lakthong sub-district.

Police and rescue workers arrived at the scene to find an overturned SUV in a ditch off the road, partially submerged. They were all taken to a local hospital for immediate medical assistance.

The driver, Ms. Sukanya Sarapanchot, who was injured but cognizant and is expected to fully recover, said she was travelling with the other six passengers and she was not familiar with the road.

When they arrived at the curve, the SUV lost control and plunged into the water filled ditch, full after a day of storms, before the SUV overturned, submerging some passengers underwater in the vehicle.

Ms. Sukanya said she broke the glass in the vehicle and helped the other two survivors escape.

Rescue workers said they tried to provide CPR for the other passengers but failed.

The Panat Nikhom police stated they are charging Ms. Sukanya with reckless driving causing death. They are investigating if alcohol or speed were factors in the accident.