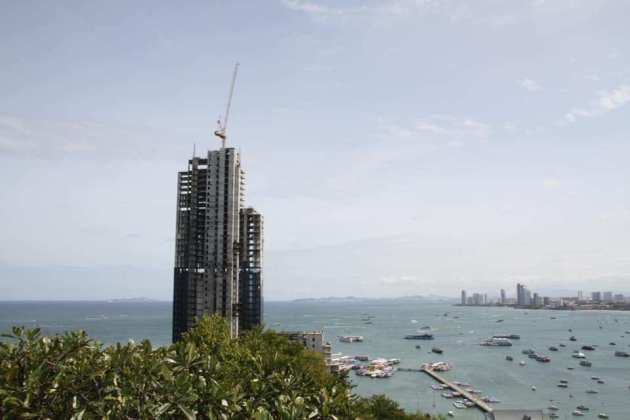 Editors Note: The following originally appeared on our sister media website early last year, Pattaya Unplugged, and was written by myself, Adam Judd. I have decided to update, add to and improve this article and post it on our main news as there have been many comments and questions regarding the condo complex and the status of the building due to a proposed Bali Hai Pier upgrade that has been in the news recently. Enjoy the article.

Many local residents and tourists have noticed the hulking 53 story condominium that stands incomplete and abandoned at the entrance to the Bali Hai pier. Questions are often asked about the story behind this condo and why it sits abandoned and is an eyesore for the otherwise beautiful bay view. Today, we take some time to answer that question. Source material from The Pattaya News and associated press have been used for this article, as well as various legal materials from condominium owners and relevant law firms.

On July 16th, 2014, Pattaya city officials halted construction of the 53-story condominium and hotel project at Bali Hai Pier following an internet firestorm after photos showing the tower obstructing a classic Pattaya viewpoint went viral online (see photo below). The mayor at the time, Itthiphol Kuneplome stated that the project – first launched and proposed way back in 2004 – had continually followed correct and fully transparent legal processes and he urged anyone alleging that shortcuts were taken to investigate the various hearings and reports themselves.

The developers, Bali Hai Co. Ltd, the Israeli owned company behind the project, claimed they had complied with all the legal steps required of them.

Officially, construction on The Waterfront Suites and Residence was ordered by relevant agencies on July 16, 2014 to stop after safety inspectors discovered that the building – particularly its fire escapes and elevator systems –allegedly varied from previously approved construction designs.

Lead contractor Thai Engineering, however, allegedly ignored the stop-work order and continued until former Pattaya Mayor Itthiphol Kunplome called a press conference on August 18, 2014 to address the chain of complaints that went viral on the Internet. The order for work to stop came only following thousands of complaints on Thai social media from “outraged” citizens over the project, including environmental groups. Thai Engineering claimed they were not communicated about the stop work order and blamed the developers.

Photos showing the tower obstructing a large chunk of Pattaya Bay were published on Facebook, Twitter and other online sources in mid 2014, with outraged Thais writing a message on republished pictures to the National Council for Peace and Order (NCPO) urging the military to investigate. This period was shortly after a military coup in early 2014 which put military, with still as of this writing Prime Minister Prayut Chan O’Cha, in charge. The vast majority of comments were negative, claiming the condo ruined the viewpoint hill and the area around Bali Hai pier.

The complaints accused the developer of building a structure both taller and closer to the beach than permitted and noted it also obstructs the view of the Prince Chumphon Khet Udomsak statue sitting on the top of Pratumnak Hill which is very important to the Royal Thai Navy. The statue is meant to be pointing to the ocean, but is now pointing to the condo.

Former Mayor Itthiphol continued to repeatedly state that the project –again first launched in 2004 – had continually followed correct and fully transparent legal processes and he continued to urge anyone alleging that shortcuts were taken to investigate the various hearings and reports themselves, releasing some documents as a matter of public record.

However, he noted, during the approval process, Pattaya City Hall did oppose the size of the tower, noting its impact on the skyline, but the city’s objections were reportedly overruled by the building board and regional leaders. Critics alleged that the project was pushed through without community support.

The former mayor also said allegations that Waterfront Suites was built too close to the sea were incorrect. Law covering the Bali Hai area forbids building within 100 meters of the waterline. However, Pattaya already approved construction of a new marina built on reclaimed land. That project, according to the former mayor, extended the shoreline out by 100 meters, thus making the condominium and hotel, which was to be managed by Accor Hotels, legal. The extension is currently under construction, over six years later, with also no sign of being completed anytime soon.

The developers, Bali Hai Company Ltd., had reportedly submitted an environmental-impact report to a Chonburi Province panel, which approved it in May 2008 and forwarded it to the Office of Natural Resources and Environmental Policy and Planning. After being lashed at online, the ONREPP said in 2014 it would investigate the project again. The exact results of the investigation were not clear.

An office of Natural Resources official told the Thai media in late 2014 that EIA (Environmental Impact Assessment) criteria forbids new projects to block beach views. However, if public agencies previously approved the impact report knowing it blocked scenery – and the developer followed that plan exactly – the fault lies with the government and not the developer, according to the office.

Itthiphol said in late 2014, however, it appears that project developers or contractors had strayed from the approved plans, at least when it came to fire escapes and elevators. Further checks were stated to be made of the entire structure to see what else, if anything, had been changed.

Itthiphol said it was possible that if the changes were substantial, officials would have to go to court to have the multi-billion-baht project demolished. He claimed the city and government had nothing to do with any changes to the project and put the blame squarely on the developers. The developers, meanwhile, claimed they were following the plan submitted to them by the government and blamed contractors for the alterations. The contractors, meanwhile, claimed they were following the plan from the developers, placing the blame on them. Clearly, the situation was complex with nobody taking responsibility.

The tower’s financial backers, of course, at the time wanted to do anything possible to avoid demolishing the structure. Cobbled together out of seven land-title deeds spread over two rai of prime beachfront land, the towering condo and hotel was seen by Pattaya officials as an anchor for their aspirations of a luxury-yacht marina.

Meanwhile, Bali Hai Co. Ltd, the Israeli owned company behind the project, continued to allegedly sell condos despite the halt on construction. In May of 2015, they announced and published this chart showing that only 38 condos were left.

The online furor over the condo continued and construction remained halted. The sales office for the condominium complex stayed open and continued to sell and promote the online website. However, as court room battles and legal claims from various groups and condo owners began, the company behind the Waterfront began allegedly losing money defending the condo in court. The construction company and contractors who had been signed to a contract to complete the condo also reportedly sued successfully for a large amount of money, the exact amount which was undisclosed.

The restructure plan didn’t work. A few months later, the Bali Hai company ltd. had reportedly gone bankrupt and the condo still stood, almost four years later, as an abandoned and decomposing hulk of a structure. Other partners and promoters of the project had distanced itself from the entire situation. In mid 2018, the crane at the top of the Waterfront was ordered by Pattaya City officials to be removed after concerns of it possibly collapsing after sitting unused since 2014. A private contractor removed the crane, Worakit Construction Company, on September 10. Talk and rumors were taking place about possibly lowering the number of floors, but at this time with the developer bankrupt, the contractors having sued successfully in court and the prior mayor out of office, the situation was stagnant.

With bankruptcy proceedings having fallen through, several condo owners still have civil lawsuits possibly pending in Thai court as well in attempts to reclaim their money from the project, which also stop potential demolishing or further construction by a different firm. Here is some information on lawsuits.

In late 2018, the owners of the land belonging to the condo were hit with two major civil lawsuits worth over 100 million baht by a group of twenty condo owners. The buyers were represented in these cases by Chalermwat Wimuktayon, the founder of Magna Carta Law Office in Pattaya.

Additionally, another group of people have reportedly sued relevant state agencies in December of 2018 that were allegedly supposed to supervise the project and prevent alterations or environmental damage. This group had connections to those upset about land encroachment and natural resources being allegedly abused.

Finally, there are also legal questions about the deed to the land the condo is on and this is yet another court situation. Here is some information on that.

As of 2020, it is believed that most of these lawsuits are still pending and the project will, for now, continue to be an eyesore on the city as it sits waiting for multiple lawsuits and legal wrangling to conclude. When that date is complete, nobody truly knows. Some sources say Pattaya City would like to order to demolish the building but that is difficult to do so with all the lawsuits pending. We will keep you informed here at The Pattaya News. One thing is for sure…the project was not recently mentioned as part of the Bali Hai revamp and plans for a cruise ship terminal in the next decade or so, so it appears that at least some officials would prefer the project to go away.

Interestingly, some websites seem to advertise the project as “completed” and condos as allegedly still for sale.

For now, the project continues to slowly decay on Pattaya Bay, with many questioning what the future of the building will be.