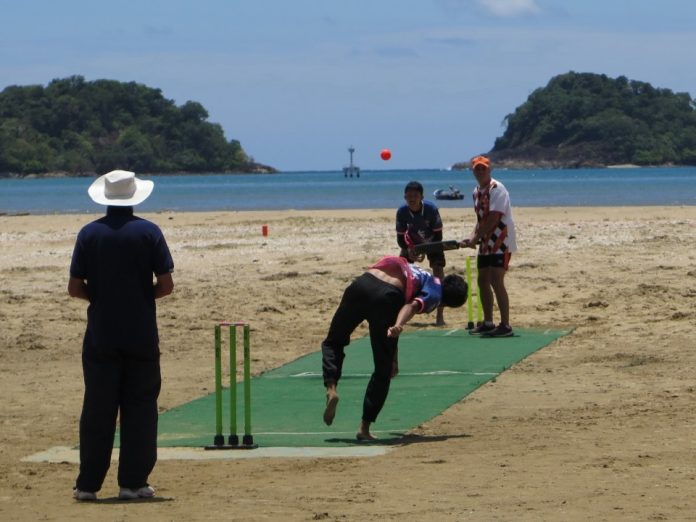 Written by Clive Rogerson for the PCC

Editors Note: If you would like to submit your local sports group or event for free to us for publishing on The Pattaya News please mail us at Pattayanewseditor@gmail.com or send us a message on our Facebook.

The PCC Stallions had high hopes of doing well in the tournament as most of the team played in the Chiang 8’s in Feb 2020, which was won by PCC.  Unfortunately, the Stallions were in a tough group that contained the Black Parrots, winners for the last two years, Lanna and The Young Ones.

Their first match was against The Young Ones who batted first.  Simon bowled first. Joe hit the second ball down Wez’s throat who promptly dropped the ball and threw it back wildly for overthrows.  A 4 off the last ball via a mis-field from Andy at Long-on.  15 off the over and things were going all Pete Tong for the Stallions.  Andy had the next over and brilliantly held a one-handed catch to dismiss Tee, who ended his over in the duck pond.  Matt bowled a poor over with extras and overthrows, but he did manage to bowl Meow and thus The Young Ones were on 21 at halfway.  Reds bowled next and it would have been a good over had not Trevor mis-fielded a ball which went for 4.  Trevor was next and he limited the fast-moving Cot to 8 runs.  Wez took the penultimate over and had Win plumb LBW first ball but it was not given.  Wez then managed to run out Win with a superb throw and Win was off to the duck pond.  The Young Ones scored 33.

The Stallions turn to bat.  Wez, Simon and Matt (12) all did well in the first three overs with several boundaries and extras gifted from wides.  24 scored at halfway and nothing in it.  Andy batted the 4th over against Juo and during some suicidal running with overthrows going everywhere, the wind blew a bail off and Andy was deemed run out!!!!  The ball was nowhere near the stumps. Reds batted against Poom.  He got himself run out but did get a 6 off the last ball.  12 needed for a win and Trevor was last man in against Win.  Trevor gets 3 dots and then ran himself out off a no-ball!!!!  Now 14 to win and Win bowls 2 wides for 10 runs.  The Stallions score 29 and lose by 4 runs.  A serious mistake they would regret.

The second match was against Lanna who chose to bat.  Simon bowled first and it wasn’t pretty.  2 no-balls and a wide gave away 12 but he caught Jack off his own bowling.  Matt bowled against Luang and caught him first ball.  Later, Luang went for a risky second and a good throw from Simon had Luang run out.  Trevor got thrashed by Chaitree with three boundaries and 15 off the over.   Reds could not contain John, who kept the score ticking over and brought the total to 20 after 4 overs.  Andy bowled well to contain Duan to 7 runs whilst Wez had the last over and restricted Chanchai to 8.  A total of 35.

The Stallions opened with Simon who had an excellent over including a huge 6 for 18.  Wez was contained by quick, short-of-a-length bowling from Luang, but he got a 6 off the last ball.  Trevor benefited from 3 wides and no-balls from Duan and along with some quick running took the score to 39.  4 ahead at halfway but then the wheels fell off.  Matt was caught twice and went to the duck pond.  Andy was caught behind off Chaitree and he went to the duck pond.  Ooh err!!!  Reds arrived and needed 8 to win.  A few wides and 2 singles secured a win for the Stallions by 1 run.  The Stallions were making it hard for themselves.

The final divisional match was against the Black Parrots.  The Stallions batted first and Simon scored 4 before getting bowled.  -1 and off to the duck pond.  Matt recovered the situation with a brisk 12, followed by Reds who peppered the boundary with 3 sixes having been caught by Bobby. 25 at halfway was a creditable score but then the wheels fell off again.  The Stallions needed a better mechanic!!!  Trevor got himself run out again, but managed to add 5 to the total.  Wez added 6 to the score and Andy took the last over, but he failed to trouble the scorers having scored 5 but was caught and bowled – off to the duck pond on a total of 36.  A difficult score to defend against the Black Parrots

The Black Parrots sent in Mike to face Wez.  A tight over where only 3 was scored.  Bobby faced Matt who finished with a 6 to score 12.  Matt Bray faced Reds.  A wide and 4 runs brought 6 to the midway score of 18.  Andy restricted Tony Slack to 7 and only 5 behind.  Simon found his bowling arm and limited Stronky to 4.  8 needed off the last over from Paul who faced Trevor.  A 6 off the first ball and only 2 needed – nail biting stuff.  Some dots and the 4th ball was hit high towards the long-on boundary, but it wasn’t going to make it and would Simon get there???   Yes, he did, the ball went to hand, but bounced out.  AAAARGH!!!  1 run scored and level with 1 ball left.  They scored a single and the Stallions lost by 1 run.

Each team in the division won 1 match but by some dint of the rules, the Stallions were deemed to be last and thus they would compete in a semi-final prior to the final for 7th or 8th place.

The semi-final was against Dad’s Army.  Simon opened the batting and scored 19 including 2 6’s.  Matt got some wides, and more boundaries for another 17 runs.  Andy got a boundary 4 and ran like a demon for another 13 runs.  The hallway score was 49 – this was more like it.  Wez could only manage 2 against some good bowling and Trevor scored 5.  Reds was last man in and forgot he only had to run halfway down the wicket and back – no extra runs there!  He added 13 to bring the score to 68 – the highest score in the tournament so far.

Rudi from Dad’s Army arrived at the crease without a bat and when he did hit a ball he forgot to run.  Rudi or Corporal Jones!  He survived a run out appeal and added 5 runs. Trevor bowled well and had Blob caught on the boundary by Wez.  -4 and off to the duck pond.  Matt bowled to Simon who scampered some singles but was bowled and thus only added 2 to the score which stood at 3.  Lyle added 2 against good bowling from Simon.  Nick scored 5 against Reds but was run out off the last ball, so nothing added and off to the duck pond.  Jonny was the last man in and was caught first ball and dropped off the last. -4 and off to the pond.  A final score of 1 and a win to the Stallions by 67.

The final for a toothpick or chopstick trophy was against the Barmy Army.  Simon batted first and managed 9 against Bodhi.  Wez had a slow start but hit 6’s off the last 2 balls for 12.  Matt smashed 19 off Matt and took the halfway score to 40.  Trevor added a comfortable 8 before Reds was faced by Pang – a decent bowler. A no-ball, a single and Reds was bowled.  -2 and off to the pond.  Andy had a steady knock against Aaron and added 8 for a final score of 52.

Neil took the crease for The KC Barmy Army and was caught first ball off Simon, but managed to recover with a 6 off the last.  3 scored.  Bodhi received some short stuff from Wez and whilst hitting a 6 to long-leg stepped on his wicket.  Scored 0 and off to the pond.  Aaron managed 5 from Matt to bring the score to 5.  Pang ran quickly against Trevor but he was bowled on the last ball.  -3 scored and off to the pond.  Jams couldn’t score against Reds so he got wet.  James added 2 off the last over and the final score was 4.  The Stallions won by 48 and collected a pair of chopsticks for 7th place.