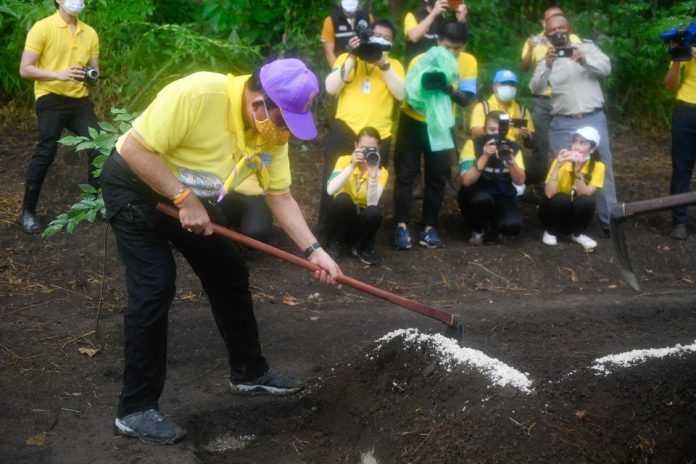 CHIANG MAI – In Chiang Mai province, the Prime Minister Gen. Prayut Chan-o-cha led governors of 76 provinces and over 1,000 volunteers in planting trees at Bua Tong Waterfall – Namtok Chet Si National Park in honor of His Majesty King Maha Vajiralongkorn Phra Vajiraklaochaoyuhua on the occasion of His Majesty’s 68th birthday on July 28, 2020, adding to a targeted 428,800 hectares of forest planted by the year 2027.

Gen. Prayut offered his best wishes to His Majesty the King before leading the planting ceremony with a teak tree. The undertaking is part of an expedited project looking to plant 161.6 hectares of forest in the six provinces of Chiang Mai, Tak, Nan, Nakhon Ratchasima, Chaiyaphum and Nakhon Si Thammarat by July 28. The areas will also have more than 10 dykes built, while another 16 hectares per province of trees are planted.

The Prime Minister thanked all those involved for their reforestation efforts, reminding them that reforestation will lead to jobs and harmony for the public. He also urged everyone to pay attention to safeguarding forests from fire and noted that citizens should look to plant 58 different types of commercial plants on their land, to provide them future revenue.

Planting is being done in every province in honor of His Majesty the King. The Deputy Minister of Agriculture and Cooperatives, Prapat Potasuthon, led a planting ceremony in Santi Suk district of Nan province, which is aimed at helping with its annual smog problem.

Volunteers and representatives of the public and private sectors planted 1,000 trees at Baan Bueng Manun Witayakan School in Chonburi province ahead of His Majesty the King’s birthday, planting Burma padauk, ta-khian and yellow star among others.

In Kamphaeng Phet province, volunteers planted over 2,000 trees, to add to a national target of over 320,000 hectares.