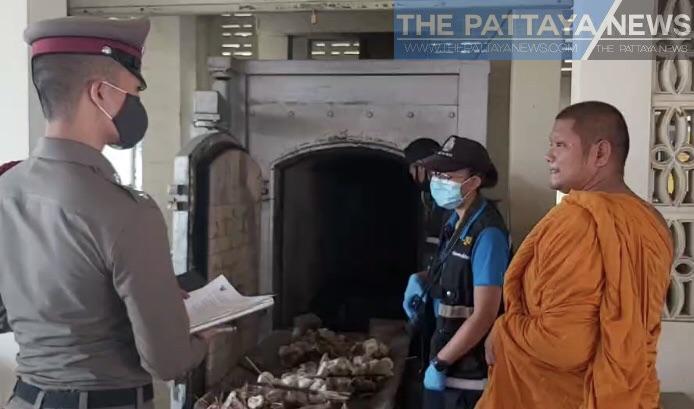 Banglamung-
A temple crematorium that exploded in Banglamung yesterday and injured two men may have been caused from a gas leak, said police investigators today.

Two undertakers, who are real life brothers, were injured during a funeral at Banglamung Temple yesterday when the crematorium suddenly exploded. The resulting explosion caused the funeral crowd to run for cover in a panic and the body of the deceased was eventually moved to a different temple to conclude the funeral.

Read more about the previous story below.

Lieutenant Chayaphon Yoorod with the Forensic Police inspected the scene this afternoon.

Chayaphon checked several large gas cylinders which are used for burning the deceased in the crematorium. She found that one lock on a pipe leading from a gas cylinder was not present. Chayaphon believes that this may have caused the gas leak and resulting explosion.

The temple abbot told police that this crematorium has been used for more than 40 years with no problems.

Mr. Wiwat Changpradit, 46, who was helping at the crematorium yesterday, told police that the two injured undertakers were unable to light the fire after several attempts. Shortly after there was an explosion that injured both men, one seriously.

The two injured brothers are expected to recover from their injuries, added Wiwat.