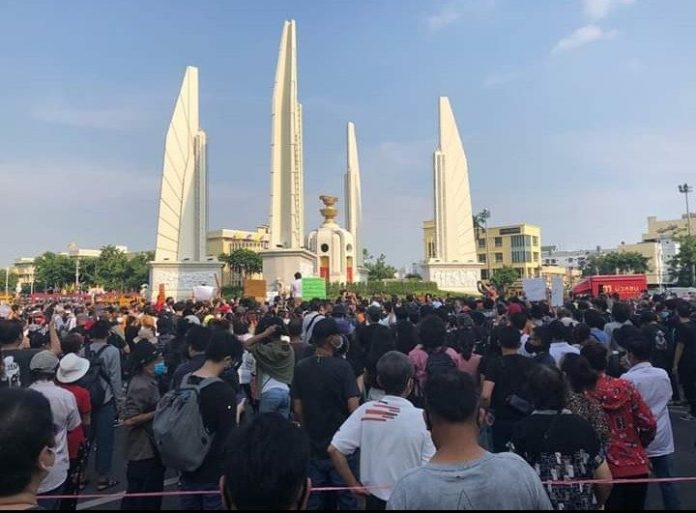 The largest political rally since before Covid-19, whose estimate of actual size varied widely depending on the source quoted, turned out to protest the current Thai Government in Bangkok at the Democracy Monument last night.

The Pattaya News covered this extensively on our Thai language News page throughout the evening. The protest was led by The Student Union of Thailand and the Free Youth group who had put together the call for the protest through social media. The rally was the largest political rally since before the Covid-19 situation and the Emergency Decree essentially banned all mass gatherings. Although mass gatherings are still technically banned at this time, government and police officials had stated earlier yesterday afternoon they did not intend to interfere with the protest.

The protest movement is asking for three key points: Dissolve Parliament immediately, rewrite the constitution and stop allegedly threatening activists and government opposition both unofficially and officially with laws, which included the Emergency Decree.

Protesters and individuals aligned with The Student Union of Thailand and The Free Youth group allege between 2-3 thousand people showed up for the rally. Thai Royal Police estimates, however, stated the size of the rally was much lower, in the hundreds of people. Pictures appear to show the size of the rally as roughly somewhere in between these two estimates, but regardless, is the largest political rally in many, many months in Thailand.

Pol Lt Gen Phakkhaphong Phongphetra, who is the Commissioner of the Bangkok Metropolitan Police Bureau was personally at the rally overseeing security concerns. He told the press that, according to the police, the rally was illegal and permission to hold the rally, which is required by Thai law was not given. It is unknown if any charges will be placed towards leaders of the protesters and officials did not comment on this question last night.

Protesters, meanwhile, said that if their demands were not met within two weeks they would step up with renewed and more intense protesting. It was not immediately clear what “more intense” protesting meant.

The protesters included appearances, among others by Rap Against Dictatorship and Free Youth secretary-general Tattep “Ford” Ruangprapaikitseree (Who had recently been in the news for traveling to Rayong and protesting the Government’s handling of the recent Covid-19 incident in which an Egyptian soldier breached quarantine and went to a shopping mall). Speakers took turns giving passionate speeches to the crowd from a raised podium set in the protest area.

Tattep specifically spoke to the fact that the Covid-19 lock-down and Emergency Decree was costing hundreds of thousands of people jobs and claimed that the decree was being used to “control the population” versus control the virus situation. He and the Free Youth group also called on the government to scrap laws, including those under the decree, that they see as banning mass gatherings and other violations of freedom of expression.

Meanwhile, Bangkok Police deputy spokesman Police Colonel Kritsana Pattanacharoen told the Associated Thai Press that  National Police chief Pol General Chakthip Chaijnda had assigned multiple high ranking police officers to the event. Kritsana stated that people had the right to expression and their opinions but must follow Covid-19 related hygiene rules and not break any laws in doing so.

The protest was peaceful, although there were a few minor scuffles with police as protesters knocked down metal barriers blocking access to some streets and closer access to the Democracy Monument. The majority of those at the protest tended to be younger, with many stating to the press they were college students concerned for the direction of their country. Nearly everyone was seen wearing a mask.

Prior to the Covid-19 crisis, protests against the Thai Government had been steadily increasing in Thailand, including large university protests in late February. The earlier protests had largely been triggered by a February court ruling dissolving the popular government opposition party Future Forward.