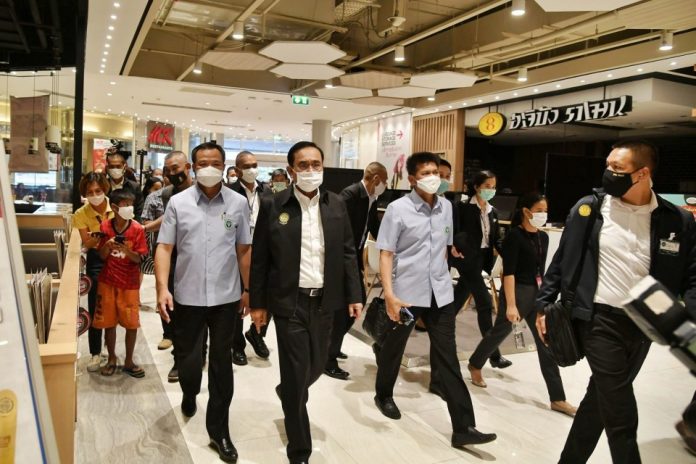 The Prime Minister of Thailand, Prayut Chan O’Cha, visited Rayong province yesterday in what was called a morale boosting visit by the Thai Government.

Prime Minister Prayut and his entourage, which included Deputy Prime Minister and Public Health Minister Anutin Charnvirakul and his Deputy Sathit Pitutecha visited D Varee Diva Central Hotel in Rayong and the Passione Shopping Destination mall which is where an Egyptian soldier who tested positive for Covid-19 stayed and visited, breaching quarantine rules.

Prime Minister Prayut urged the people of Rayong to stay calm and live their normal lives. He promised the government and himself took full responsibility for the incident and that it would not happen again. The Prime Minister had previously taken several steps to close loopholes after apologizing for the incident.

Prayut also stressed that there were no new locally spread transmissions of the disease. Sathit, meanwhile, confirmed later in the evening that not a single one of the eleven high risk close contact cases with the Egyptian soldier tested positive and that hundreds of low risk cases have also tested negative for the virus.

The people of Rayong, however, have demanded more than just an apology-Provincial trade body chairman Noppadol Tangsongcharoen and the Rayong Chamber of Commerce are asking the government to provide financial aid to the province after the incident which had previously not had a single case of Covid-19 in over 100 days. Noppadol said the incident had led to a “climate of fear” and that some other provinces were going as far as to impose further scrutiny on any traveler from Rayong, regardless of if they were near the Egyptian soldier or not.  The Rayong Chamber of Commerce reported that thousands of bookings for hotel rooms for later in the month, including on normally popular Koh Samet, had been canceled by domestic tourists afraid to visit the province.