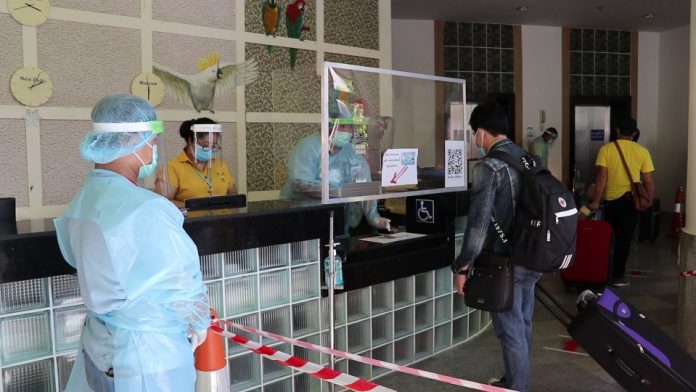 In an evening update on a news story in which a 43 year old Egyptian soldier tested positive for Covid-19 and potentially breached quarantine procedures in Rayong, Thailand more information has been revealed this afternoon and evening. Catch up on this story and what has already been stated here.

First, Dr. Taweesin Visanuyothin, of the Center for Covid-19 Situation Administration, or CCSA, will hold an unscheduled press conference tomorrow at 11:30 AM from Bangkok to address the situation. He will also reportedly address the rising concern and outrage on social media regarding both the case of the Egyptian soldier and a 9 year old girl from Sudan who was reportedly a family member of a diplomat given an exemption to enter the country.

Secondly, the Thai Army, through spokesman Col. Winthaya Suwariyok, stated that the Thai Army has no connection to the incident and were not involved in any way, shape or form with the soldier. Col. Winthaya said General Apirat Kongsompong, the army commander, reportedly had no knowledge of the flight or crew and it was not sanctioned, endorsed or supported by the Army. This was in response to trending hashtags on twitter and outrage on social media blaming the Army for the incident.  Col. Winthaya warned that blaming the army for the incident could be considered “fake news” as they were not involved.

Meanwhile, multiple hotels in the Rayong area have released public statements on Facebook, claiming they were not involved or not the hotel where the group of Egyptian airmen stayed. This follows statements from some Thai customs officials blaming the hotel, still officially unidentified, where the soldiers stayed, for the reported breach of regulations.

Fourth, Lieutenant Colonel Kritphon Rianglekjamnong, the director of the U-Tapeo airport, stated that in a review of procedures and regulations the airport did not find anything abnormal in their processing steps. He stated the airport is fully cooperating with the CCSA and Department of Disease Control on the investigation.

Finally, Dr. Suwanchai Wattanayingcharoenchai , MD. Director-General of the Department of Disease Control, urged the public not to panic. He stated that CCTV had been reviewed and that the DDC, Rayong Government and CCSA had fully identified every location where the suspected infected person went.  Suwanchai said that the visits were considered “low risk” and that every precaution would be taken to test anyone exposed to the man. He declined to name the exact locations visited, stating that this information would likely be released by the CCSA in the near future.

Suwanchai also said that if any businesses or places were to be force closed this decision would rest on the Rayong Governor and the Communicable Disease Committee. The hotel involved has already been partially locked down, officials added, with the two floors where the group of soldiers allegedly stayed and staff in close contact closed and quarantined.

More information is expected at tomorrow’s press conference, scheduled for 11:30 AM.