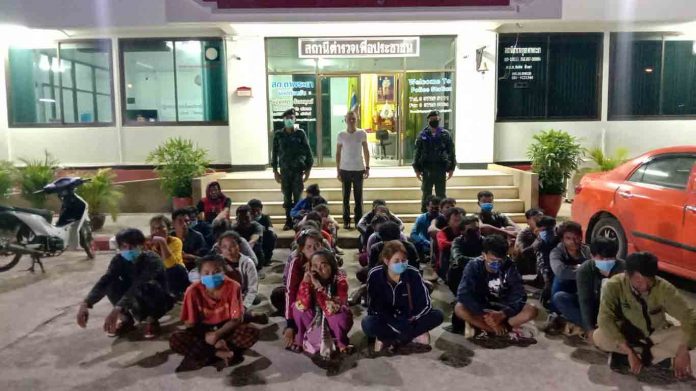 This will involve relevant agencies to step up already strict measures at borders and within industries frequented by migrants to help detect those in the country illegally, stated Lt-General Kongcheep Tantawanich today, who is a spokesman for Prawit.
-=-=-=-=-==-=-==-=-=-=-
We reported on here at The Pattaya News on Friday of last week when Sa Kaeo immigration alone arrested over one hundred illegal migrants in a single day.
-=-=-=-=-=-=-=-=-=-=-=-=
Dr. Taweesin Visanuyothin, of the Center for Covid-19 Situation Administration, stated earlier this month that the CCSA and Royal Thai Army believed that up to 3000 illegal immigrants had managed to successfully sneak into the country, which has not had a single confirmed locally spread case of Covid-19 in 49 days, last month.
-=-=-=-=-==-=-=-=-=-=-=-
Lt. General Kongcheep stated today that the Army believed numbers of illegal immigrants were rising since the lockdown was lifted entirely in Thailand, especially those returning to informal jobs in the entertainment industry.  He also stated that the Army were cracking down on the root cause of many illegal immigrants entering Thailand, sophisticated smuggling networks that brought in migrants for an average of 3000 baht a person.
Facebook Notice for EU! You need to login to view and post FB Comments!
Sending