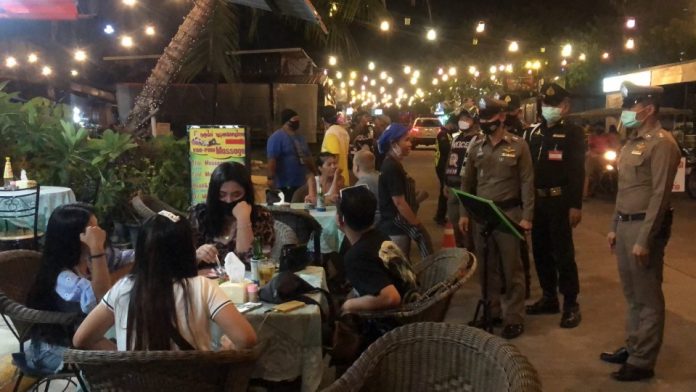 Pattaya City Police, for at least the third time in a week, toured local businesses in the Soi Buakhao area and warned owners to follow the rules set for by the Thai Government in regards to Covid19 regulations.

Police Lieutenant Colonel Nithat, Deputy Director of the Police Station in Pattaya led a team of police, press and related agencies as they toured parts of Soi Buakhao including the Tree Town Market.

Nithat stated that the Government was preparing to launch “Phase Five” of relief measures to ease restrictions and regulations around Covid19 measures taken which is planned to include entertainment venues like pubs, bars and karaokes. This is likely to be officially announced on Monday by the Center for Covid-19 Situation Administration, or CCSA.

Nithat made it clear, however, that those measures had not been relieved at this time and that police would continue to disperse groups of people drinking in public and gathering, which is currently against rules set by the Emergency Decree to control the Covid19 Coronavirus.

Police stated that Tree Town Market was properly complying with measures, with proper hygiene checks and barriers set around the market to discourage gathering and socializing by patrons in public spaces.

This follows several prior inspections in which police closed several adjacent restaurants for various reported violations such as lack of social distancing or primarily operating as a pub instead of a restaurant. Nithat said that restaurants should primarily serve food and not alcohol and establishments that focused on alcohol and entertainment would need to wait until Phase Five relief.

Bars and related entertainment venues have been closed in Pattaya since March 18 for Covid-19 related measures.