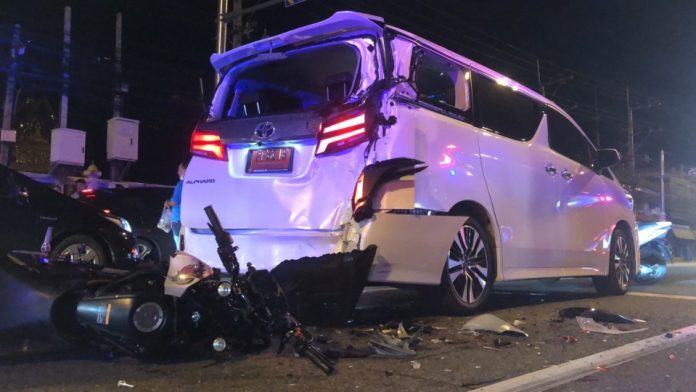 Pattaya-
A 43 year old motorbike driver was pronounced dead at the scene after crashing into a minivan at an intersection in Pattaya last night.

Lieutenant Colonel Pongsawat Siriphonnoppakhun of the Pattaya City Police was notified of the accident at 8:00 PM at the Wat Boonkanjanaram Intersection.

Police, emergency responders and The Pattaya News arrived at the scene to find a damaged motorbike which had collided with the back of a damaged white minivan at the intersection.

The body of the motorbike driver, who was identified as 43 year old Mr. Tanakrit Saejang, was found nearby. He had died on impact according to rescue personnel. His body was taken to a local hospital.

The minivan driver, Suthep Jearanaibanyong, who is working as a tour guide, told The Pattaya News that he had stopped hid minivan at the red light. He had several foreign passengers in the minivan.

Suddenly, the motorbike, which was driving with alleged high speed, crashed into the back of his minivan. Neither he nor his passengers were injured in the incident.

Pattaya police are checking CCTV footage nearby to determine the exact sequence of events.