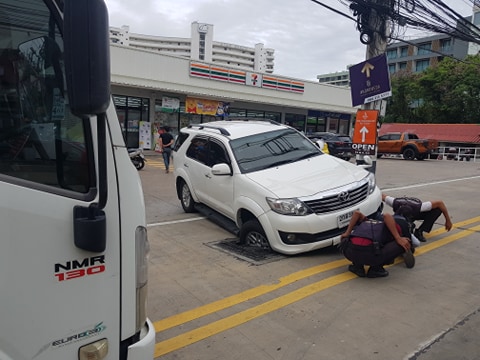 A local expat, Mr. Santosh Jaiswal, informed The Pattaya News that he was the driver of the vehicle that went viral on local media this morning for getting stuck in a manhole in front of a 7-11 in the Pratumnak Hill area on Soi 5 at 8:30 AM.

The area in question had recently been under road construction, according to multiple local residents.

Mr. Santosh stated that the manhole was fixed by local construction workers once his vehicle was removed from the manhole that he states collapsed beneath his vehicles weight. The manhole was repaired quickly, in about twenty minutes, but he was concerned that nobody in authority offered to help with the financial damage that repairs to his vehicle will cost and hopes that the incident causes relevant authorities and agencies to reinspect drainage covers in the Pratumnak area. 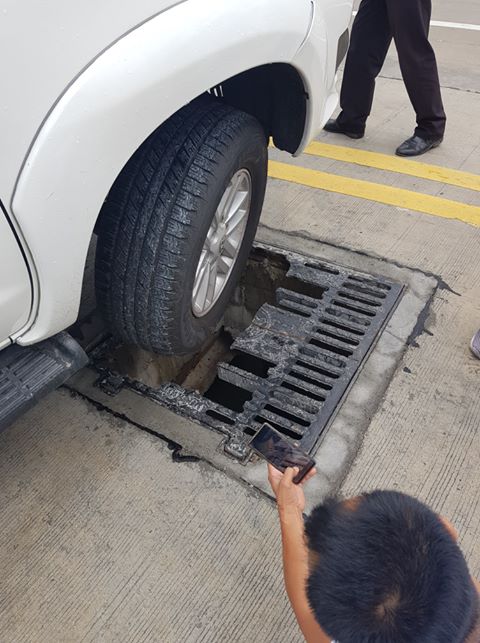 One unconfirmed comment on social media claims that this was not the first grating to suffer structural damage since the roadwork had been completed and that several others also seemed to be damaged or had suffered damage. The Pattaya News invites readers in this area with more information to contact us directly regarding this issue.

Mr. Santosh was not injured in the incident but expressed his concern that if one had been traveling at speed or if the drainage cover had collapsed potentially on a pedestrian that significant injuries could have taken place. He stated he will be pursuing the matter privately with relevant agencies in regards to the financial damage caused to his vehicle during the incident.