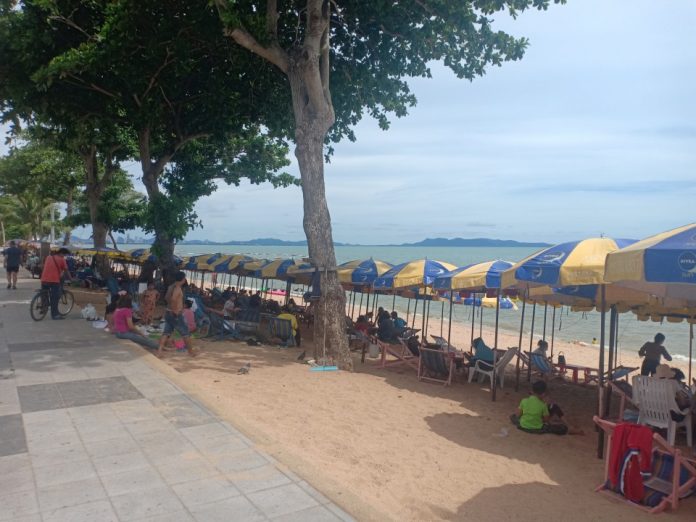 As Pattaya area beaches, including the popular Koh Larn, enter their first weekend since the official reopening of beaches which were closed for two months the Pattaya City Police Chief Khemmarin Pissamai has a message for visitors:

This message comes following pictures of thousands of people swarming Bangsaen beach on the birthday of her Majesty the Queen, a public holiday, earlier this week.

The Prime Minister reportedly personally spoke to leaders in popular beach resorts telling them to make sure enforcement of the social distancing rules is high and that pictures like seen on Bangsaen were damaging.

The Center for Covid-19 Situation Administration has stressed repeatedly that people appear to be letting their guard down. This is understandable, say many critics, with no reports of a single confirmed case in Pattaya in over seven weeks and none nationwide that were locally spread in eleven days. Borders remain closed to visitors except repatriated Thais who go directly to state quarantine.

The rules for the beach were updated by the public health Ministry earlier today and include the following:

Mask wearing on the beach except when swimming is mandatory.

Two meters between other people while on the beach that are not part of your immediate family.

Beach chairs must be fully sanitized and disinfected after every customer.

Drinking alcohol is strictly forbidden, even on your own alone. Smoking is also forbidden.

Any sort of parties or social gathering with people outside is forbidden. This especially applies to alcohol based parties or events.

Unapproved loitering or selling products and services not licensed for selling is prohibited.

Beach goers should limit their time to one to two hours to avoid long periods of possible exposure to crowds or groups.

Police Chief Khemmarin stated authorities would be in place throughout the weekend to enforce rules on social distancing, especially around parties and alcohol.