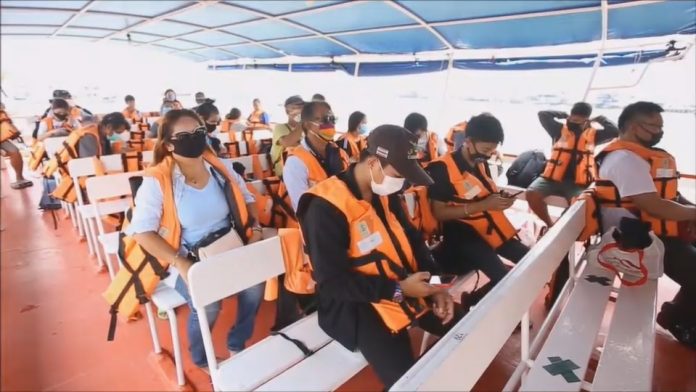 The Koh Larn community has voted in overwhelming favor to re-open the island to local residents and domestic tourists effective Monday, June First.

The results have been given and reportedly approved by Pattaya City Mayor Sonthaya Khunpluem and the Chonburi Governor and Chonburi Communicable Disease Committee.

The ferry to the island will require social distancing and will only be able to take roughly one hundred customers at a time versus the normal two hundred, said Mr. Chaisit Khanthong, 40, who works on one of the ferries.

Municipal Law Enforcement officers will check temperatures and provide hand sanitizer to those traveling to the island as well as enforce social distancing for anyone standing in line waiting to board a ferry.

Businesses on the island have begun to prepare for their first tourists in over two months since the island chose to close to all tourists and local residents. The island, despite thousands of tourists daily, never recorded one confirmed case of the Covid19 Coronavirus.

The islands famed beaches have had several months of recuperation without the normal large number of visitors, Chaisit added.

Businesses on the island will be expected to follow the Public Health Ministry rules. Venues that have not been legally opened by the government at this time such as bars will remain closed. All beaches will be open for visitors with social distancing rules intact.

Additionally, hotels in the Chonburi province remain legally closed on the order of the Chonburi Governor. Unless the order is rescinded prior to the opening of the island, which there has been no notice of so far, all guest houses and hotels will not be able to open Monday for overnight visitors. Hotel closures are provincial, not national, the Pattaya News notes.