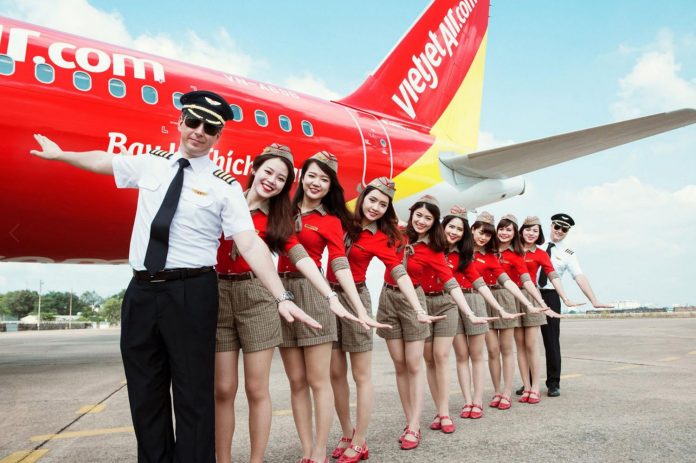 Vietjet announces its audited financial statement for 2019: a solid financial base for recovery after the pandemic

(Bangkok, May 11, 2020) – Vietjet Aviation Joint Stock Company (HOSE code: VJC) has announced its financial statement for 2019, audited by KPMG with positive figures, reflecting strong growth in its core business of air transportation. In 2019, the airline’s flight network increased by 24%, maintaining its leading position in Vietnam’s domestic market with total number of transported passengers reaching 25 millions, an increase of 28% year on year. The group audited business results of 2019 shows its total revenue of VND41,252 billion and VND3,868 billion in profit before tax, increasing by 22% and 27% respectively compared to 2018.

The airline received 7 aircraft in 2019 while the number for 2018 was 16 aircraft. Consequently, the audited revenue from aircraft sales & leaseback activity stood at VND9,350 billion. As a result, Vietjet’s consolidated pre-tax revenue and profit in 2019 were at VND50,602 billion and VND4,569 billion respectively.

According to the audited financial report, as of December 31, 2019, Vietjet operated 78 aircraft with the average age of 2.75 years. Its load factor stays at 87% with technical reliability rate being at 99.64%, which are among the top airlines in the Asia Pacific region. Vietjet has also been awarded the highest ranking for aviation safety with 7-stars from AirlineRatings.com.

According to Vietjet’s 2019 audited consolidated financial report, the airline’s total asset was VND48,859 billion with the owner’s equity being at VND17,249 billion including VND2,347 billion of treasury shares, an increase of 25% and 22.8% respectively against those in 2018. Its current liquidity was 1.3 while debt to equity ratio was 0.79, a healthy rate in aviation industry financing. Vietjet’s EBITDAR (earnings before interest, taxes, depreciation, amortization and rent cost) margin was 30%, being ranked one of the top airlines in the region and globally. The Company’s cash balance was at VND6,073 billion, inclusive of short-term financial investment. The deposit to manufacturers reached USD369 million.

The carrier’s growing business also attributes to its growth on ancillary revenue, including check-in baggage fees and extra service fees, cargo transportation, inflight services (food, beverages & souvenirs) and advertisements. In 2019, Vietjet’s ancillary revenue was VND11,305 billion, up by 35.6% compared to 2018. The portion of ancillary revenue in the airline’s total air transportation revenue also increases from 25.3% in 2018 to 30.4% in 2019.

Being active on measures to fight against Covid-19 pandemic, Vietjet has implemented many solutions from the early of 2020 to now, including expanding the cargo transportation business, developing SkyBoss product and ancillary services, offering “Power Pass” flight pass, etc. In addition, Vietjet also starts to self-serve the ground operation at Noi Bai International Airport in Hanoi under the permission of Civil Aviation Administration of Vietnam (CAAV). The self-service will help Vietjet be more active in operation, reduce costs, increase ancillary revenue, and especially improve passenger quality services at the airport.

In 2019, Vietjet Aviation Academy continues to contribute in the airline’s sustainable development plan in order to not only meets the growing demand for the airline itself but also serve the need of domestic and international aviation. Certified by EASA (European Union Aviation Safety Agency), the Academy has carried out 1,327 training courses of pilot/cabin crew/technicians, etc. for 70,523 trainees in 2019. E-learning technology for online research and training continued to be applied and promoted with 544 courses for 19,936 trainees a year, which has proven its effectiveness during the Covid-19 pandemic throughout thousands of trainees.

Vietjet and Airbus signed an agreement for adding two new aircraft Simulators (SIM) in 2020 and 2021, remarkably enhancing capacity for training at Vietjet Aviation Academy. The equipment will not only serve for the pilot training sessions but also for other training courses in the process of qualification and evaluation of cadet pilots as well as improving the training quality of Vietjet’s flight instructors. The installation of entire equipment for emergency training, basic training for flight crew including passenger cabin simulation equipment, emergency training, wave pool with Olympic standards, etc. at the Academy have also been completed, making the Academy one of the region’s leading modern-scale specialized training institutions. Last April, Vietjet also kicked off the Application Research Zone project for the Aviation Technical training at the Academy.

Amid the Covid-19 pandemic, Vietjet is providing a variety of air cargo transportation services to not only serve the domestic and international demand but also help bring the airline a new and stable source of revenue.

The Government relief activities are also expected to reduce the pressure and further support the recovery of the aviation industry by offering exemption/reduction in taxes and fees for aviation services, reduction in environmental tax for flight fuels and financial aid, etc. Last year, the total corporate income tax paid by Vietjet was VND9,023 billion, being one of the largest taxpayers in Vietnam.

Currently, CAAV has permitted domestic flight operation and in preparation to resume international routes. As soon as the pandemic is controlled, the airlines with good internal resources and cost management like Vietjet together with its solid financial resources accumulated in 2019 and previous years, is expected to recover quickly and rebound post pandemic, playing a driving force to restore the economic growth and increase investment in the countries and the world.

The new-age carrier Vietjet has not only revolutionized the aviation industry in Vietnam but also been a pioneering airline across the region and around the world. With a focus on cost management ability, effective operations and performance, Vietjet offers flying opportunities with cost-saving and flexible fares as well as diversified services to meet customers’ demands.

Vietjet is a fully-fledged member of International Air Transport Association (IATA) with the IATA Operational Safety Audit (IOSA) certificate. As Vietnam’s largest private carrier, the airline was awarded the highest ranking for safety with 7 stars in 2018 and 2019 by the world’s only safety and product rating website AirlineRatings.com and listed as one of the world’s 50 best airlines for healthy financing and operations by Airfinance Journal in 2018 and 2019. The airline has also been named as Best Low-Cost Carrier by renowned organizations such as Skytrax, CAPA, Airline Ratings, and many others.