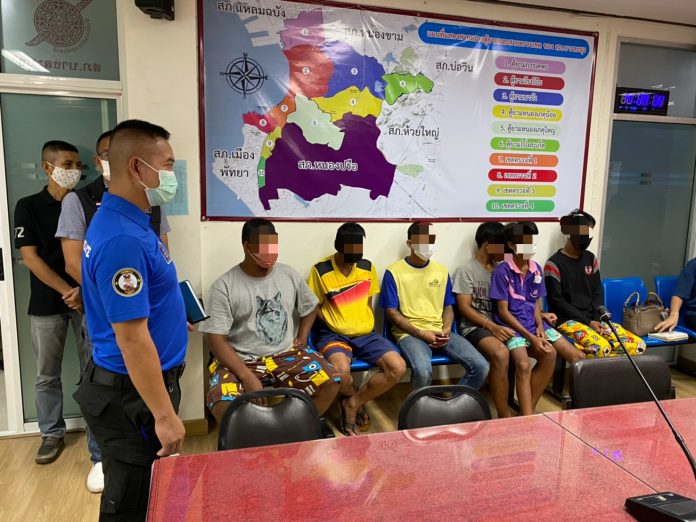 Six curfew breakers have been arrested today after they have allegedly destroyed a local shop and a car after the shop owner declined to sell alcohol to them during Thai National curfew hours.

The incident happened at a local shop on Bypass 36 (Krating Lai – Rayong) on Saturday night.

More about the original incident from our report can be found here:

The Region 2 Police Deputy Commander Major General Nantachart Suppamongkon revealed to The Pattaya News that they have arrested six Thai male suspects who are a 14 and 15 year old boy, a 17 year old, 27 year old Tae Narktongin and Piya Nakam and Yuttana Kleabbua, both of whom are 33 years old. The names of those suspects under the age of eighteen were withheld by law enforcement per legal requirements.

Tae and one of the boys wanted to buy alcohol at 11:00 PM but the shopkeeper did not sell and told the group to go home as being out during curfew is against Thai law. The shop was closed, however the family lives in the shop and were spending time together in the front of the venue when the incident happened.

The two suspects, Tae and a younger boy, started a heated verbal argument with the shop owner Mr. Somkit Pumonna over the refusal of service. Both sides agree that events unfolded as described up to this point. However, what happened next is disputed.

According to Tae, the shop owner’s son used a knife to attack and injure Tae. He claims the shopkeepers family attacked their group physically first. The shopkeeper and family claim the suspects attacked first.

Tae and the younger boy left the shop before coming back with the other four suspects. They then proceeded to destroy the shop and the families car in a fit of anger. The shopkeeper and his family spent the night at a friend’s house afterwards, allegedly afraid the group would return and cause physical harm.

Law enforcement is reviewing CCTV footage and considering both versions of the altercation which disagree on who physically attacked who first. Wounds on one of the suspects arms do at least lend credence to the statement that he was attacked with a sharp weapon, however officials are unsure of if he was, as he stated, attacked first.

Regardless, at this time all six suspects are facing charges of breaking the National Thai Curfew which is between 10:00 PM to 4:00 AM daily. The suspects have reportedly admitted to breaking the curfew. The curfew is designed to help prevent the potential spread of the Covid19 Coronavirus.

Violations of the curfew can mean stiff punishment of up to two years in jail and/or fines of up to 100,000 baht.

Police say additional charges will likely be forthcoming but further investigation is needed.