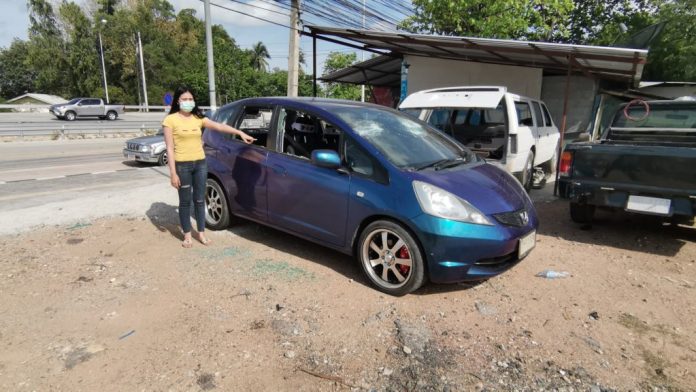 A local small convienence store owner, his daughter, wife and two grandchildren were allegedly attacked by a large group of young Thai males last night when he refused to sell them alcohol during curfew and outside of legal alcohol sales hours.

The incident took place at around 11:00 PM last night at a small convienence store located near Village number one in the Banglamung sub-district.

Miss Thipthida Chaisat, 19, the daughter of the shop owner, told The Pattaya News that around 11:00 PM a group of around ten heavily intoxicated teenage Thai males approached the shop where the family also lives and were inside talking. The shop was closed, however, one of the teenagers asked to buy alcohol.

Ms. Thipthida told The Pattaya News that her father refused as it was during curfew and sales were also forbidden in Chonburi past 6:00 PM. At this point the group became angry and her father and the group became embroiled in a furious verbal argument. Her father demanded the group leave and instead they smashed up the shop and destroyed the family vehicle according to her statement.

The group used, according to Ms. Thipthida, sticks and bats to attack the shop and their car. Her father was uninjured.

She and her father called the police who came to investigate and then went with them to the police station to report the incident in Banglamung-but it wasn’t over.

During the time period that the shopkeeper and Ms. Thipthida were at the police station several members of the group returned to the shop and allegedly attacked Mrs. Praiwan Phu Munna, 53, the wife of the shopkeeper. She was watching two grandchildren at the time, according to her statement, and protected them with her body. She was largely uninjured, she stated, but badly shaken up.

Allegedly, the teenage males threatened her not to tell law enforcement any details and to withdraw their police statement or there would be further problems. The family said they chose to sleep elsewhere last night after the two incidents.

The Banglamung police stated they have several solid leads on the identity of the group of teenagers, who they believe are a known local gang, and are utilizing CCTV and other resources to track them down. If caught, they face numerous charges of assault, breaking and entering, property damage and emergency decree violations for breaking curfew which carry stiff penalities under the current Thai laws.