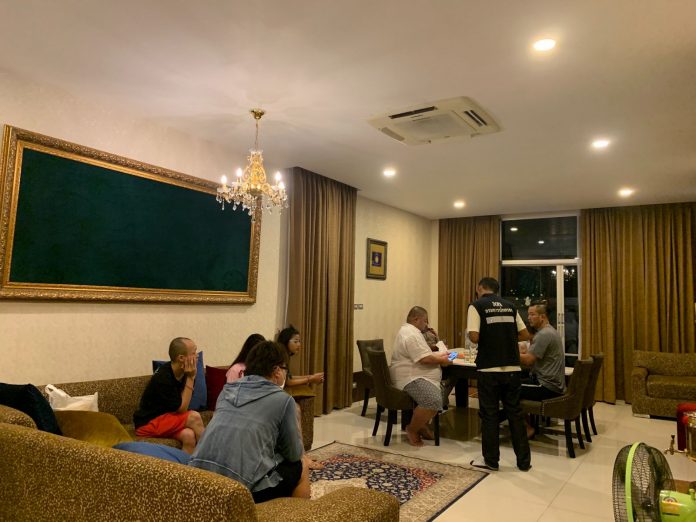 Sattahip-
Na Jomtien Police Officers raided a party at a house with ten people, most of them from out of town and described as domestic tourists by police last night in Sattahip.

The Na Jomtien Police was notified by a concerned citizen there was a noisy party at a house in the Naka Waree housing estate at 9:30PM.

Police arrived at the house and knocked on the door to be greeted by 37 year old Thai national Paruehat Tampanon who said he is renting the house for several days.

Na Jomtien police discovered that there were nine other people inside the house. Two of them tested positive for illegal drugs, police added, without naming the specific drugs. Many bottles of beverages and alcohol were found.

Paruehat told police that he and his friends were staying in the house for two days.

He claimed he did not know that Chonburi still has some strict measurements and bans private parties. Paruehat also claimed all ten people know each other and regularly live with each other so there would be no threat of spreading any virus.

Additionally, the house owner, 35 year old Piyanuch Ignatov, was charged with illegally operating a hotel and disobeying a Chonburi order.

All those arrested face stiff Emergency Decree rules to help control the spread of the Covid-19 Coronavirus, which means up to 100,000 baht fines and/or up to two years in jail.

Under the Emergency Decree, socializing or gathering, especially with alcoholic drinks, no matter the amount of people, is against the law. Police have warned several times house parties, even gatherings of only a few people, can violate the Emergency decree and people should not be visiting friends at this time.