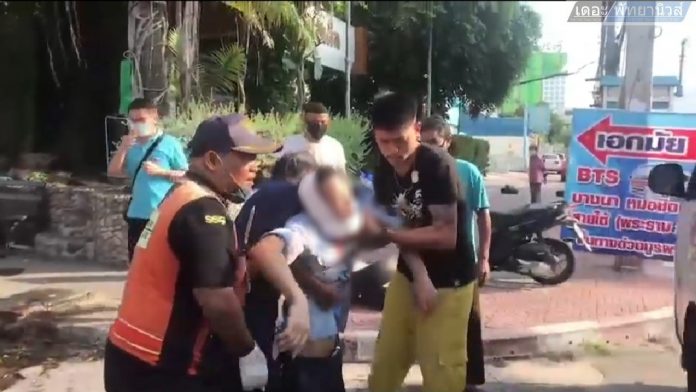 A security guard has sustained serious injuries after losing his balance and falling down while cutting bushes, causing his gardening shears to fall directly onto his neck in Mueang Chonburi yesterday morning.

A video of the aftermath of the incident is below. Although censored, sensitive viewers should skip this video.

Rescue workers were notified of the incident yesterday morning in front of a hotel on Sukhumwit Road in Bang Plasoi.

They arrived at the scene to find 51 year old Mr. Supot Jarankit who is a security guard of the hotel.

A severe wound was found on his neck caused by his gardening shears that was bleeding heavily. He was rushed to a local hospital.

Witnesses said Mr. Supot was cutting bushes while standing on a small piece of wood propped on top of two barriers, as seen in the photo below.

He was accidentally stabbed by his gardening shears after losing his balance and falling while cutting the bush.

He remains in a local hospital in serious condition as of this afternoon.