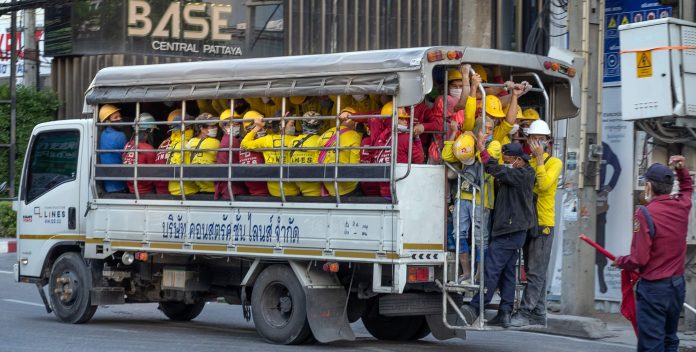 Pattaya City was officially announced as a white zone today, which means that no sign of the Covid-19 infection has been found in about three weeks, despite thousands of proactive tests of people in high risk categories, such as those working in Immigration, supermarkets, taxi drivers, hotels, condo security and other roles that still see regular interaction with the public as a whole.

As a result, Pattaya City removed the restrictive checkpoints that had been in place for three weeks in the city blocking access to all non Pattaya residents and workers and allowing better access to those from Nongprue, Banglamung, Sattahip and other district areas in Chonburi.

Inter provincial travel is still discouraged by the Thai Government amid constant warnings of potential fourteen day quarantines and random checkpoints ensuring that travel is only for essential reasons. This is despite only one case of Covid-19 being announced nationwide yesterday, which was an imported case from Malaysia.

Across Pattaya city, despite a few road-bumps here and there, physical distancing for the most part is still taking place as a few businesses slowly begin to open, such as some dine-in restaurants, electronic stores, salons and even places like local parks. Pattaya City even announced this afternoon that the much maligned and criticized ban on exercising on the sidewalk along the beach will be officially lifted this weekend, although beaches overall remain closed for fear of people gathering or traveling from other provinces to visit the beaches.

However, the cities biggest attraction and employer, the massive entertainment and tourist industry, still remains forced closed, leaving tens of thousands still unemployed in the area.

One area that has received regular concern from local residents who have regularly mailed and messaged The Pattaya News is construction workers being transported to and from construction sites in the Pattaya and Chonburi area on a daily basis. These trucks, such as seen in the photos sent to us by concerned citizens, show that there is little to no physical distancing taking place. Many of those who work in the construction industry are migrant workers from nearby countries like Cambodia and Myanmar and work and live in traditionally tight constraints, living, working and sleeping with up to dozens of others.

Those who have followed world news are well aware that countries like Singapore who had a second major wave suffered it primarily due to migrant workers in dormitories with living conditions that allow no physical distancing. As a result, cases spread like wildfire among the migrant workers.

In the past several days there have also been concerns raised on the Southern borders of Thailand around mostly illegal migrant workers who have also caught the Covid-19 Coronavirus inside of detention centers without physical distancing.

Thai Authorities have stated over the past few days they are covering all the medical expenses of migrants who catch the Covid-19 disease and have increased the level of proactive testing in the migrant community. They also stated they are taking concrete steps to improve hygiene and physical distancing, although difficult, in migrant worker communities. Currently, borders are closed to non repatriated Thai’s and those who are working have been in Thailand for some time, The Pattaya News notes.

Pattaya City Officials from City Hall have previously stated that migrant worker communities have also been identified as a high risk category and proactive testing has and continues to take place, with no signs of the Covid-19 Coronavirus found.

Regardless, many are concerned that if the Covid-19 Coronavirus does find a hold anywhere, it may be in these very tightly packed communities where physical distancing is nearly impossible.

Tell us what you think or what precautions or measures besides proactive testing could be made in the comments below.