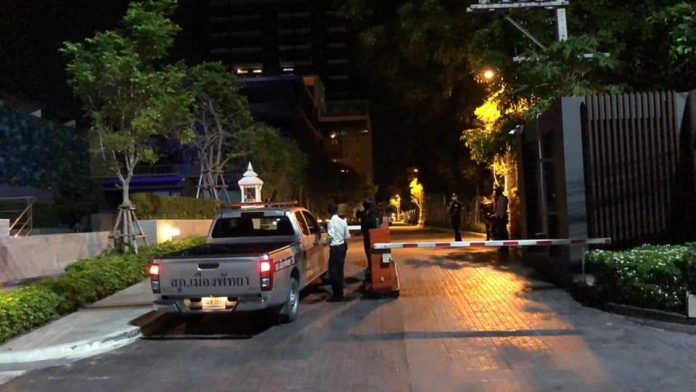 Sawang Boriboon Rescue Services and associated press reported that a foreigner, believed to be a Chinese national, fell from the ninth floor of a Jomtien condo around 8:30 PM this evening. The male foreigner survived the fall with serious injuries and was taken to a local hospital.

The condo, which is not named per Pattaya News policy during ongoing investigations, is a luxury condo with over thirty floors on Jomtien Beach.

The foreigner is believed to be a resident of the condo and lived on the ninth floor. He landed on and fell through an area of the fifth floor of the condo, which broke his fall according to rescue workers.

Pattaya Police stated the incident is under investigation and there were no direct witnesses or anyone else staying in the room, nor any sign of a struggle.

Police stated that there is CCTV in the area that will be used to help determine if the incident was an accident or otherwise.

The foreign male, whose name was not given by police or condominium management, remains in the hospital as of press time. We will provide more details on this incident as they come in to us and our related correspondents.