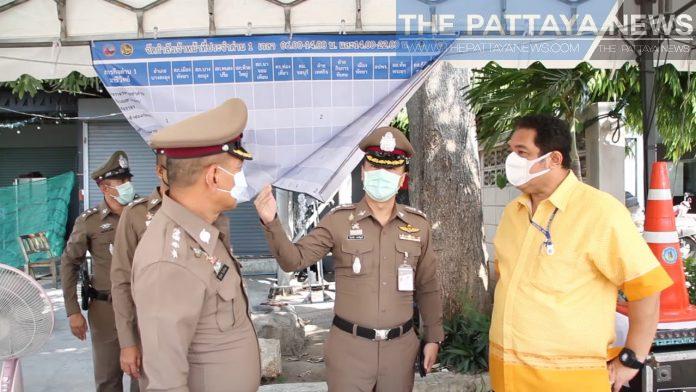 The Pattaya City Mayor, Mr. Sonthaya Khunpluem, spoke with The Pattaya News today and discussed the results of the cities several weeks of checkpoints, proactive testing and the overall situation with Covid-19 in the City and said currently results have “exceeded expectations. He also very briefly discussed the next steps to start to slowly ease some restrictions in place.

Pattaya City was identified by local and provincial leaders as well as the Department of Public Health as a potential “hot zone” for the Covid-19 virus due to multiple factors in early April and placed into effect multiple precautions and measures to both control and detect the spread of the Covid-19 Coronavirus. These measures included setting up a field hospital at The Grand Bella Hotel in Pattaya, proactive testing of thousands of high risk people in Pattaya City and setting up checkpoints and restricting access to Pattaya City to non residents and those who do not work in the city.

These measures came on top of orders from the Chonburi Government that shut down thousands of businesses in Pattaya, including the cities main attraction, the thousands of bars, nightclubs, tourist attractions, restaurants and entertainment venues. These harsh measures have temporarily put tens of thousands out of work and led to steadily growing food charity lines held by both Pattaya City Hall and private businesses and individuals, but the city leadership feels the measures, although harsh, were critical to help prevent any potential spread of the Covid-19 Coronavirus in the area. Other National and provincial measures, like a curfew from 10:00 PM to 4:00 AM, closures of public spaces like parks and beaches, total ban of alcohol sales, Domestic and international travel restrictions and bans on social and mass gatherings also substantially helped reduce the spread of the virus.

The Mayor told the Pattaya News that only four positive tests had been found with thousands of pro-active tests at the Grand Bella, and all four were contact traced to previous confirmed cases, the majority being close contacts and relatives from a Thai man who had recently returned from Phuket. The high risk groups tested were  individuals who either worked or lived at places with previously confirmed cases of the Covid-19 Coronavirus as well as people in fields that still had substantial contact with the public in Pattaya, such as Immigration, Supermarket employees, motorbike taxi drivers, 7-11 and Family Mart staff, condo security guards, hotel staff and other high risk categories.

The Mayor said that no cases had been found directly in Pattaya City in 13 days. Tomorrow will be the fourteenth day, which is considered to be a full incubation or quarantine period of the virus, with no new cases. Two cases were found in Banglamung on April 19, but they were close contacts of a previous case and not directly in Pattaya City. No cases in Banglamung have been found since April 19.

The Mayor thanked the people of Pattaya and all the staff involved in the checkpoints, the local Law Enforcement, the field hospitals and all the medical staff of the city for their cooperation over the last several difficult weeks and helping drive the positive results the city was seeing.

The current restrictions end on April 30th at Midnight, which brought the question of what is the next step and will the checkpoints continue, as well as what the re-opening process will specifically look like in Pattaya.

The Mayor stated that as the Emergency Decree was now extended another month to help control the spread of the Covid-19 Coronavirus by the Thai Government that several rules, like the curfew and ban on mass gatherings, would stay in place. The Mayor told The Pattaya News that he would be meeting over the next several days with the entire Chonburi Communicable Disease Prevention team and the Chonburi Governor to discuss the next steps.

He stated that he knew the public had many questions and he understood how difficult this situation was for the unemployed and all the business owners with closed venues.  He asked for patience and promised to be transparent about what the next steps would be. It would be decided as a  team with the Chonburi Government on if the checkpoints will continue, along with other rules like the alcohol sales ban.

The Mayor concluded by saying that the Chonburi Government understands that the vast majority of the businesses in Pattaya are considered “red” or high risk for opening under suggestions and color coding developed by The Public Health Ministry on re-opening and that the Chonburi Government was discussing pro-active measures and collecting ideas on how, if at all, to safely re-open business in the city. He did not, however, give specific details at this time.

The Pattaya News will provide any updates from the local leadership as soon as they are officially announced.