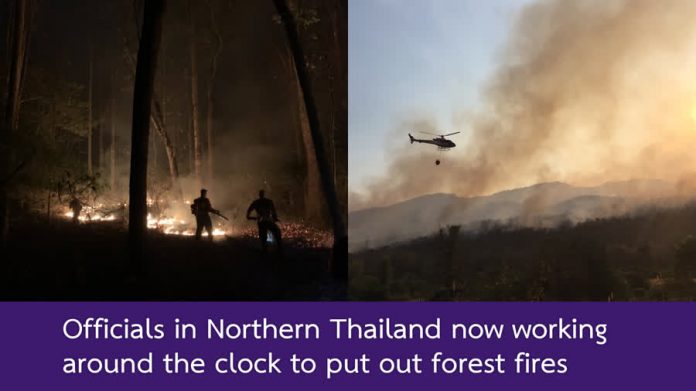 CHIANG MAI (NNT) – The Governor of Chiang Mai, Charoenrit Sanguansat, had a meeting with related units to discuss the forest fire situation at Doi Suthep – Pui National Park, after nearby areas were hit by fires several times last week. Although officials have been able to extinguish the blazes, new fires have flared up. The officials have now been conducting fire-fighting operations in seven areas for three days.

The Chiang Mai governor also received a gift basket and financial support from the deputy minister of interior, Niphon Bunyamanee. They will be presented to Pairoj Pattamathaworn, a firefighter who was injured while on duty.

The forest fire situation in the nine northern provinces has started to improve, with the number of of hot spots decreasing by about 50 percent, from 674 to 336, thanks to the firefighters, who have all been working around the clock. They are closely monitoring fire-prone areas in Chiang Mai, Mae Hong Son, Tak and Chiang Rai provinces. Since March 30 this year, 72 people have been arrested for starting fires. There have now been 454 cases altogether.

According to the Pollution Control Department, levels of PM2.5 in the air measured between 34 and 179 micrograms per cubic meter in the North this morning. The air quality indicator was red, which indicates very unhealthy conditions, in Mae Sai district of Chiang Rai province and Chiang Dao district of Chiang Mai province. PM2.5 levels were above the safe limit in the provinces of Lampang, Lamphun, Mae Hong Son, Phrae, Nan, Phayao, Tak, Uttaradit, Phichit and Kamphaeng Phet.