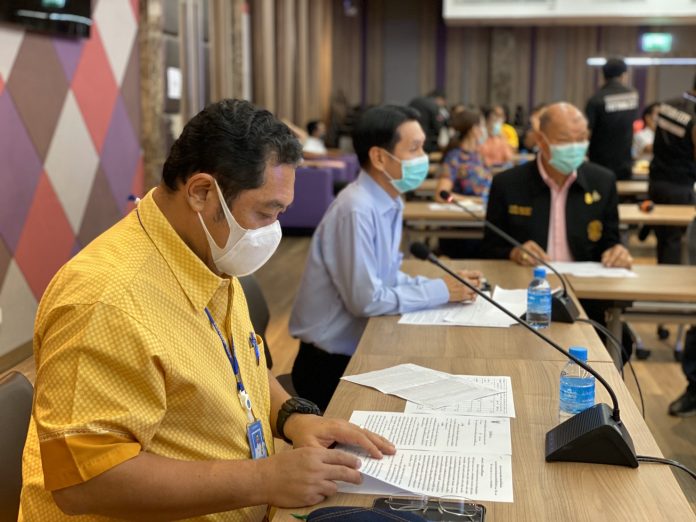 Pattaya –
Pattaya City is preparing for a 24 hour closure manned by multiple checkpoints on April 9.

The Banglamung District Chief Amnart Charoensri revealed this afternoon that Pattaya ( In Banglamung district ) has the top number of confirmed cases at 30 in Chonburi.

“Many of the confirmed cases in Pattaya are foreigners who were visiting Pattaya and living here. Most of our cases are imported.” The District Chief told The Pattaya News.

“We have to control the spread of the Corona virus. This is a difficult measure but we must stop people, especially foreign tourists, coming to the city at this time.” He added.

“The committee has approved to close Pattaya by setting entrance and exit check points.”

“The closing area will be from the Krating Rai Intersection before the overpass along with other additional checkpoints which will be finalized before Thursday.” The District Chief continued, showing an example but not finalized map below.

“This approval is to be suggested to the Chonburi Governor to issue the official closing announcement from 2PM on April 9 onward.” He concluded.

Specific measures for allowances for who can and cannot pass the checkpoints, which will essentially lock out the entire “Dark Side” suburbs from Pattaya were not clarified to the press at this time. Social media users showed concern on being able to visit hospitals, immigration or Supermarkets. However, in a brief statement, city officials said that essential visits, which were not clarified as what is essential, would be allowed. Medical and essential deliveries like supplies will continue. Passes may be issued and approved, an example is below.

This is not a stay at home order or a lockdown, residents can move freely within the city and checkpoint boundaries outside of the national curfew, currently 10:00 PM to 4:00 AM hours.

Foreigners will need to have their original passport at all checkpoints. Thai nationals will need their ID card. Temperature checks will take place at every checkpoint, if one tests high they will be required to go to a hospital immediately. Interviews for reason and purpose of travel will take place.

Both the Mayor and the District Chief said that if one wants to avoid the checkpoints and unnecessary hassle they should stay home during this time and stay safe.