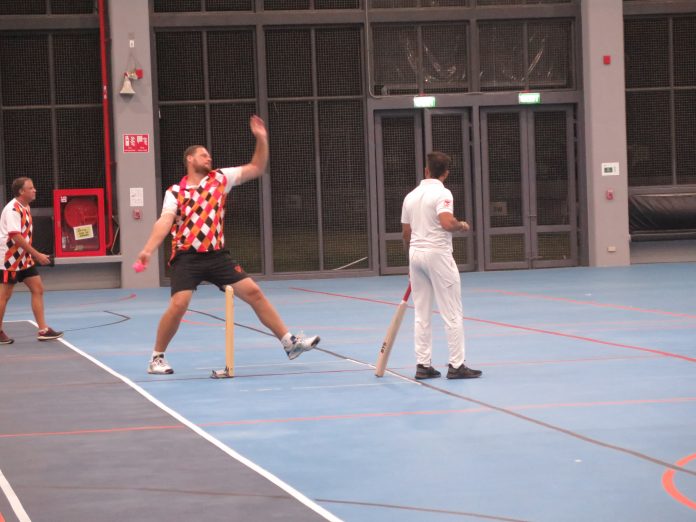 PCC suffered a manpower drain, or should that be a personpower drain, because some members were unavailable after the stupendous, monumental, fantastic win at the Chiang Mai Big Bash International 8’s Tournament. Thus, the team had a rather 2nd XI feel to it.

Yet again PCC failed to realise the importance of retaining wickets and keeping extras to a minimum; a comment that has been made several times before. PCC lost 8 wickets and gave away 41 extras. Had wickets been kept to a usual 3 or 4 and Extras to 20, then PCC would have won by an easy 14 runs or so, but it was not to be.

PCC won the toss and decided to field. AAS opened with Alex and Chetan facing Jainish. Chetan was bowled 4th ball and a good start for PCC. In the pairs’ next 2 overs, Alex kept plugging away for his 20 and taking most of the strike. Chetan managed 5 but the pair added 35 because of 12 Extras. 35 for 1 after 3 overs. Prasan and Lucky continued in a similar manner.

Lucky was bowled by Venkat and Prasan unwisely left a ball from Edwin Van Rensburg that he thought was going down leg as a wide, but it was a leg spinner and removed leg stump. Aneride, a debutant, was asked to bowl, but it was not her day – 11 wides and 8 runs. Edwin’s wicket was welcome but he got bashed for 16. AAS were 72 for 3 after 6 overs. Bernie and Matt Harkness tried to stem the flow but 14 Extras and 30 runs from Dimple and Molin took AAS to 111 for 4.
PCC opened with Venkat and Jainish facing Chetan.

Chetan could be described as a diminutive man but he is a pretty accurate and quick bowler. He bowled Venkat and had him run out in the first over. Jainish manged to get 6 from a Leg bye (with overthrows and quick running) so the first 3 overs produced a satisfactory 31 despite the loss of 2 wickets. Edwin Van Rensburg and Aneride took the next 3 overs. Edwin was run out in the first over as the pair had not sorted out their calling procedure and the error would be responsible for another mishap in the next over.

Meanwhile, AAS were un-sportingly bowling at full pace to Aneride, so she got bowled by Prasan. 28 runs were added, mainly by Edwin, but 15 were lost in wickets. So, 44 for 5 after 6 overs. Bernie Lamprecht and Matt Harkness tried to rescue the situation. They crashed 44 off the bat (37 to Matt and another record), and with 12 Extras, scored a record breaking 56 off 3 overs, but Bernie was having a horrible day. Run out off Chetan, bowled by Dimple and again by Chetan, he relinquished 15 runs. A disappointing score of 85 for 8 and a loss by 26 runs.

Best batsman was Matt Harness, best bowler was Prasan who was also MotM