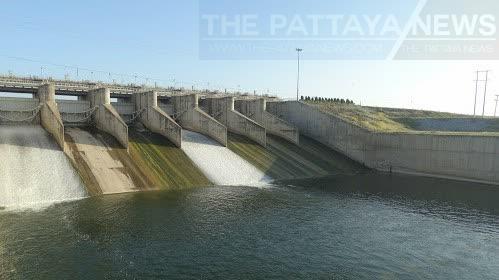 LOPBURI (NNT) – The Ministry of Agriculture and Cooperatives has assured the public of sufficient water throughout the remaining dry season, while relevant agencies work to refill dams along the Chao Phraya River.

Deputy Agriculture Minister Thammanat Prompow, together with executives and officers from relevant agencies gathered at Pasak Jolasid Dam in Lopburi province yesterday to assess the effects of the present drought.

Following a helicopter flight over the area, Thammanat stressed that the drought this year might be considered the worst in many years, however, the Royal Irrigation Department has assured farmers and members of the public, that the remaining water will be sufficient for normal daily activities, except for out-of-season rice farming.

The water level at that time was already considered the second-lowest in 20 years, just behind 2015 that stands at just 4.247 billion cubic square meters.

The lower than usual water levels in the dams is due to unusual weather patterns, resulting in less-than-usual precipitation. The public is urged to use water sparingly while agriculturalists must refrain from conducting out-of-season rice farming.

A full rainmaking operation is slated to be carried out starting today, to enable the dams to increase water storage.

Drought in the kingdom usually runs from November to May.