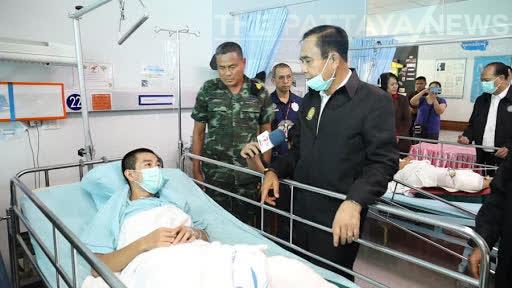 NAKHON RATCHASIMA -The Prime minister of Thailand visited the victims of a shooting rampage at Maharaj Hospital this afternoon, assuring them that the authorities have taken action.

The prime minister said a total of 27 fatalities were reported including the lone gunman who was extra-judically killed and 57 others were reportedly injured, 25 of whom have been allowed to return home. The death toll has increased to 30 as several additional bodies were found after he spoke in the mall.

The government is taking responsibility for all medical expenses for those injured while medical teams formed by the Ministry of Public Health and the Department of Mental Health are looking after the mental health of the injured and relatives of the slain victims.

The Ministry of Social Development and Human Security is also providing assistance for the victims.

The prime minister said he has followed the situation closely in which a gunman was heavily armed and held people hostage at Terminal 21 in Korat and instructed the authorities to maintain the people’s safety.

He thanked medical staff and nurses for fully handling the injured victims.